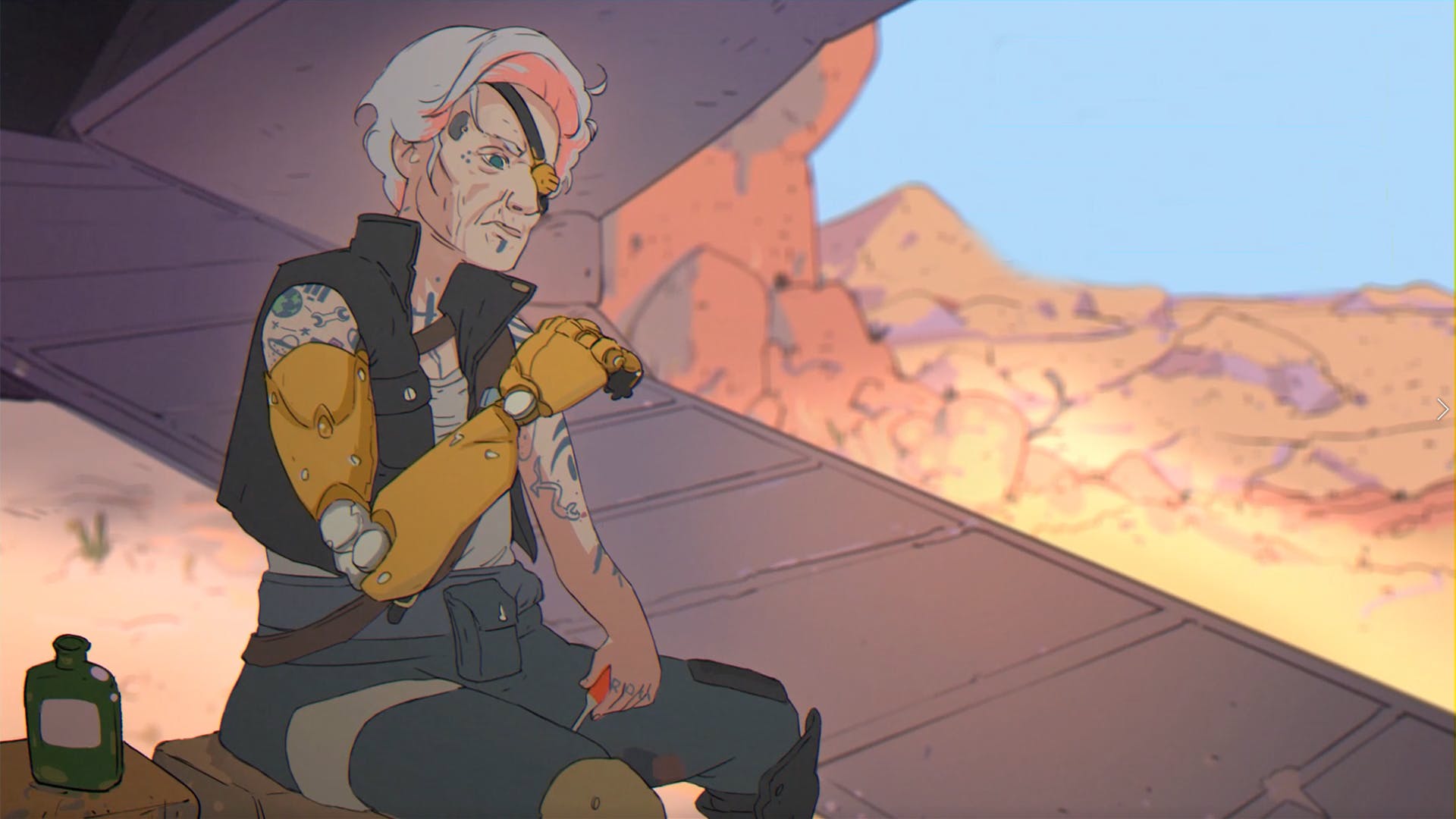 A team needs to connect beyond the task at hand to really get a job done, long term. It’s not enough to be invested in the gig at hand, you also have to be invested in each other. Similarly, A Long Journey to an Uncertain End will likely live or die on how much I can get invested in the characters. After playing through the demo (30 mins or more depending on how you play), I think A Long Journey has just that ahead of itself if it wants to pull this off.

As one might expect, the writing shines brightest so far and the diverse cast of characters are designed just as thoughtfully. Taking into account race, sexuality, gender identity, age, disability, and more, A Long Journey draws from our world in a way that’s refreshingly inclusive.

Plus all the characters are stylish as hell managing to look futuristic and down to earth all at once with space chef Zeke’s extra mechanical arms and ingredient belt being one of my favorite character designs in recent memory. Unfortunately, the current visual backdrops are dull and lifeless in a way that clashes against these aforementioned highlights. And while there may be weight to my choices that weight isn’t effectively conveyed to me, making me feel like my decisions are just taking me along a story rather than shaping it directly.

You start out just as lost as the main character and it’s fitting for those early moments of character customization and tutorialization. As usual, I took my sweet time with the character creator and was happy to find a slew of options I was able to mix and match. Various body types and bust sizes made it easy to build a character that resembled me (at least in build and general look). I was happy to see you can even select your pronouns, which sadly isn’t standard practice across games, and you even got to select your ex’s name and pronouns when asked about them during the opening.

Oddly enough, you’re not really the person you built. You are the ship itself and you exist in a world where sentiment ships have been outlawed long ago. This makes the character creation a little strange and takes me out of the story to ask myself questions like: is my avatar a hologram of the ship? Is this what the ship imagines she looks like?  Or is this just something else entirely? Frankly, I found it distracting.

You’re told directly that you’re the ship which should avoid any narrative confusion but it’s jarring to see my character as a person while negotiating the fact that I, in fact, am not human at all.

Getting to know your crew is a big part of the journey but traveling and staying alive means you need fuel and supplies. Luckily, there are plenty of jobs across the galaxy as management sim is at the core of this narrative driven adventure. It’s up to you to staff these jobs appropriately to give yourself the best chance for success.

Each crew member has their own attributes that impact their ability to perform a specific job. To simplify things, you’re told directly if a character is a good fit or just okay before sending them off to work. Selecting the pass time button will allow jobs to get going and you’ll be prompted to make decisions about how a crew member approaches the job’s tasks which was one of the more intriguing parts of the demo.

"The writing may be good but the gameplay doesn’t make me feel rewarded for reading it."

Will you ask for better pay or take what you’re given? Will you use brute force or try to sneak by undetected? Will you cut the red wire or the blue during a tech related job? These choices are compelling but unfortunately the impact they have on my results isn’t conveyed clearly enough to me. I want to feel the weight of my choices, I want to kick myself over a miscalculation, but so far I feel like aimlessly selecting answers would yield equally dull results.

The writing may be good but the gameplay doesn’t make me feel rewarded for reading it. And so, I find myself tempted to skim over the walls of dialogue I’m presented with which is the last thing you want to feel in a story driven game.

The vagabond, gig life being brilliantly underscored by survival; it’s reflective of that real life experience of working towards that simple goal of existing in peace.

While every character in A Long Journey has to grind, they all have their own things they’re running from or running towards with motivations ranging from wealth and fun to safety. More importantly, most characters feel fleshed out in what drives them in the moment-to-moment even if they have a bit of a blanket personality in the form of their skills such as strength, technical ability, and charm to name a few.

"The vagabond, gig life is brilliantly underscored by survival."

You make choices within the job but ultimately your success comes down to a literal wheel spin. It’s cool in a “dice roll/board game” sense but it ultimately makes me feel like everything that came before was meaningless and that I should just click through and cross my fingers for a good result.

If you’re unhappy with your result you can select Call in a Favor and spin again but there are no guarantees or better odds by doing this. And, just like in real life, you can run out of favors so I never felt super incentivized to try again.

If sentient ships being outlawed wasn’t bad enough, you’re on the run from an abusive ex and thus are traveling across planets for resources and potential long-term survival (figuring out how to disappear).

But going from planet to planet has its own bit of gameplay and heartwarming moments with the crew. From taking in the fact that your crew member, Matias, is giving midnight makeovers to everyone to receiving distress calls and having to decide whether or not to part with some of your own rations. Additionally, down time can be spent talking to your crew directly which is a great way to get to know everyone’s background outside of main story beats.

My only gripe with this section is my main gripe with the demo (and game so far): stagnant visuals fail to bring the story to life. At the current state, I’m forced to imagine them more than I’d like. Of course, this is just a demo with a newly launched Kickstarter so there’s presumably plenty of room for growth.

When I’m traveling all I see is my ship. What’s happening may be exciting but it’s less impactful when all I see is a block of text. Likewise, when I’m on a planet completing jobs all I see is a parked ship and a still screen of the area. It doesn’t change even as I’m narratively going to different jobs. Character’s don’t move or emote at all which leaves me at arm’s length.

The animated cutscenes used in the game’s trailer are a flavor that’s missing from the current demo. There’s some good groundwork to A Long Journey to an Uncertain End but its ability to build something noteworthy rests on its ability to breathe some life into its very solid script and decent gameplay all while adding some weight to its flimsy choices.

It’s important for games to tackle tough topics but I’m a bit wary of the ways this “running from an abusive ex” conceit may play out narratively and mechanically. Crispy Creative claims to care deeply about telling stories in a way that’s both informative and enriching so I’m cautiously optimistic.

"Putting in your ex’s name may get too real."

This early on it remains to be seen how this specific storyline will play out. It does seem like the story could be triggering for some, especially because the game prompts you to write in your ex’s name. And for those of us who have been in abusive relationships, that could make the experience a bit too real. I will say, the demo did leave me wanting to know more about the relationship and that may be enough to hook me.

There’s plenty to be hopeful about when it comes to A Long Journey but, as it stands, it’s just stiff and repetitive enough to undermine all it has going for it.

Check out the demo and newly launched Kickstarter for yourself and let me know if you’re sold on this upcoming space odyssey.