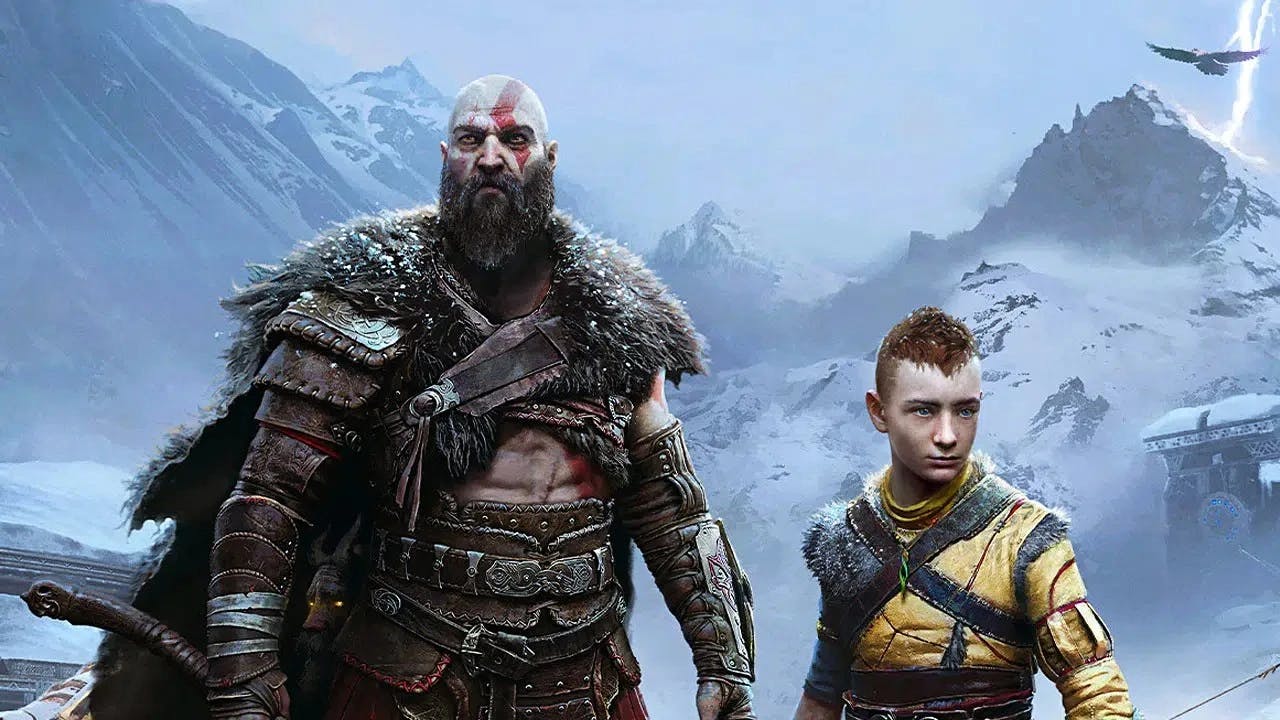 Plenty of games mash up genres but Cult of the Lamb makes one of the most appealing combos I’ve come across in a while. Rougelite dungeon crawler meets management sim, Cult of the Lamb is all about building up your cult of woodland followers while you destroy all non-believers and take down rival cult leaders.

What really strikes me about this one is the lovely combination of cute art with dark content. But what makes this standout is the fun ways the basebuilding and dungeon crawling compliment each other since you can train your flock to embark on quests for you. There’s a fun personal element thrown in as you can name and design your followers, this gets even better if you’re playing on PC and streaming the game since viewers can tune in and partake.

All in all, there were a lot of smart decisions that went into the design and overall experience Cult of the Lamb provides. This cult understands that the devil is in the details.

Mario + Rabbids Sparks of Hope may get knocked for being an iterative sequel but what it’s building on is one of the most approachable turn-based tactics games out there. Sparks of Hope opens things up on the battlefield favoring general movement zones over its previous tile-based movement system.

Like any tactics game, the highs of Sparks of Hope come from pulling off effective combos. Raining fireballs on enemies so that they run around and get shot by Luigi’s Steely Stare is akin to lining up and knocking down the dominos. Not too complicated to set up but endlessly satisfying to watch.

The Sparks themselves had a playful twist to combat. Charmingly derpy in design, these floating friends pack quite a punch in the form of elemental damage. It’s a classic conceit; pretty safe, but ultimately well-executed. Mario + Rabbids Sparks of Hope feels like such a known quantity that it isn’t the most exciting pick for this list but it is undoubtedly one of the best games that came out in 2022.

The best puzzle game I played all year, Patrick’s Parabox is Russian nesting dolls meets infinity meets boxes (with the occasional self-made paradox). You play as an anthromophic box, just a square with little eyes, and can push on surrounding boxes to move them. The goal of each level is to place other boxes and yourself into their respective spots, which involves pushing boxes into other boxes.

The magic of Patrick’s Parabox comes from the way it trips up your perception as you delve further and further into a single level only to go back outside and see that you’re inside again. Yet, it all makes sense.

Patrick’s Parabox is undoubtedly clever but what really makes it special is the diversity of level design paired with smart tutorialization. There are 350 levels in total; each world has a mechanical motif and each level within that world explores a new angle of said motif. For instance, one of the later worlds introduces a possession mechanic where you can control other boxes, allowing you to move items from otherwise unreachable sides.

Everyone plays Pokemon a little differently and different things keep people coming back game after game. For me, it’s always been about loving the creatures themselves. Raising old favorites and finding new ones is at the forefront of my mind and Pokemon Legends Arceus puts the emphasis on that, with battling taking a bit of a backseat.

The novelty of finding Alpha Pokemon out in the wild and, after some strategy, building a team of Big Mons is a welcomed change. While finding higher-level Pokemon out in the world isn’t new it’s now common enough to feel like you’re genuinely in the wild. Plus, there are plenty of areas to explore and the rideable Pokemon make traversal easier as you progress.

Funky twists on old formulas help things feel fresh. I was floored when I found out I could defeat bosses without any Pokemon left to battle at all and while each big battle after that is the same it was still a cool deviation.

Pokemon Legends Arceus celebrates our relationship with Pokemon while reminding us that “they’re frightening creatures.” There’s still a lot of room for growth in the franchise but I hope to see many of these features carried forward for years to come.

On its surface Tunic seems like a serviceable version of games that have come before. But after just a few hours Tunic reveals itself to be something special.

There’s an obvious charm to it with an adorable fox and geometric shapes made delicate thanks to its soft, yet colorful palette. But beyond that is a wonderful mechanic that helps unravel the game’s mystery: the instruction manual. This game is all about finding pages of its own book. It’s a meta move and a nostalgia play but it absolutely works. It’s cute but also incredibly functional and creates a uniquely helpful gameplay loop.

At their core, instruction manual pages give the player information on Tunic but that info comes both directly and indirectly. Sometimes it’s face-value info like the controls, other time’s it’s handwritten notes that don’t quite mean anything until you connect the dots.

Tunic takes the “playground guide help discussions” cliche and turns it into a charming mechanic rife with mysteries that serve as its own story. The combat gets in its own way but it takes a back seat to something pretty special.

Admittedly I’m a bit of a Splatoon stan and this is Splatoon better than its ever been before. New weapons, maps, and a mech that looks like a crab are all welcome additions but what really makes Splatoon 3 a franchise high for me is how much easier matchmaking is when it comes to squadding up with friends. Nintendo and online functionality are lifelong enemies but Splatoon 3 takes some major steps in the right direction (disconnects be damned!).

Having a customizable locker may seem superflous as it has no impact on gameplay but it provides a nice casual reward for those of us who enjoy to dip into turf wars again and again. And the single player is campaign is the best one yet, adding interesting challenges to help break up the standard levels. Plus the idols remain as charming as ever with Big Man as a Manta Ray, Frye as our giant foreaded queen, and Shiver is… also there!

When I tried the original OlliOlli years ago I was immediately frustrated by my own inability to pull off combos and progress. In general, combo memorization and perfect execution have never been my strong suit or what I enjoy in games. So you imagine my delight and surprise when I fell head over heels for OlliOlli World, which skirts all my previous issues with an artstyle that looks like a Saturday morning cartoon and a soundtrack that feels like lo-fi beats to skate to.

What works so well here are the ways levels are in direct conversation with tutorials. While not perfect, you rarely need to do anything you are explicitly taught and the tutorials are rolled out throughout the adventure so you’re never overwhelmed. OlliOlli World is all about journeying to meet the mystical skate gods on your quest for Gnarvana and along the way you truly learn to move with divinity and grace.

Not to mention the entire thing is playful as hell. You skate through a beach town and can take on sidequest from a bodybuilder. You ride billboards held by giant bees in whimsical forests. You try to pop (or avoid) giant cat balloons. Getting good (or just better!) at any game takes repetition and OlliOlli World paves the path to improvement with wildly fun courses and sick cosmetic rewards.

As someone who started rollerskating 2 years ago, there’s a joy, freedom, and rush rolled into the act and it’s one that OlliOlli World captures incredibly well. This game is a surrealist escape into a skater’s paradise and I couldn’t get enough

3. Kirby and the Forgotten Land

Now standing among the best titles of this 30-year franchise, Kirby and the Forgotten Land is an instant classic. This is also one of the best-looking titles on the Nintendo Switch, with lovingly detailed environments and uncompromising performance across all six worlds.

As usual, what makes Kirby great is his mechanical versatility (all thanks to those iconic copy abilities). This is even more magical and strange thanks to Mouthful Mode: in which Kirby envelopes an object, adopting some of its properties. This makes for some wild combos from Kirby wrapping around a car and bursting through cement to him becoming a vending machine that shoots soda cans at things. Kirby is the ultimate power fantasy made unique thanks to how silly it all is.

While combat remains, mostly, unchallenging the real pushback comes from cleverly hidden collectibles, secret challenges, and optional levels that brilliantly double as some of the most engaging tutorials I’ve ever experienced.

Also when you upgrade the Ranger ability that gives Kirby a gun Kirby gets TWO guns. And to quote an in-game collectible description: “Kirby is the cutest bonk to have ever bonked and bonk” and he is well-deserving of a spot on this list. Kirby and the Forgotten Land has a solid start and it only gets better as you play. Plus, it has one of the best endings I’ve played in recent years with the final levels acting as the greatest hits for everything that made the adventure a blast.

Horizon Forbidden West improves on almost every aspect of the first title, which was already fantastic. Whether main quest or side story, playing is its own reward of fun, narrative intrigue, well-paced leveling, and appealing skills. The thrill of hunting remains the focal point and it's only enhanced by a larger and more diverse set of mechanical animals, weapons, and tools.

Narratively, Horizon Forbidden West doubles down on the sci-fi and cranks up the drama. At its height, it’s a thrilling pairing of challenging battles and compelling plot points. While Aloy’s characterization still leaves a bit to be desired, Forbidden West gives charming side characters enough screentime to grow attached making Aloy’s army a team for the ages.

What really makes this title a standout of the year is how well it fires on (almost) all cylinders. The open world is based on tried and true, checkbox design but damn it if I’m not looking to check every single box and have a blast doing it. And with each task done, I get an interesting world detail, more time with a great cast, beautiful vistas, cool armor, surprisingly powerful weapons, or just another heart-pounding encounter.

This is an odyssey that lives up to its mythological roots. Part epic play, part bloody ballet: God of War Ragnarok is a masterpiece all around. Combat remains largely the same as its predecessor (2018) but the arenas have more verticality and enemies pose more of a challenge, forcing you to be a bit more thoughtful while still being simple enough to enjoy the impact of attacks and the spectacle of battle.

God of War Ragnarok is such a page-turner of a game. I found myself pingponging between stress and curiosity as I watched the fates of this cast unravel. And best of all, God of War Ragnarok embraces a wider spectrum of emotion: leaving plenty of space for humor and heart alike. I laughed out loud while playing this game and wasn’t expecting that at all. Its side quests are just as quality as its main story giving you plenty to dig into. God of War Ragnarok is where ridiculous production value meets quality storytelling and gameplay and the result is something we’ll be talking about for years to come.