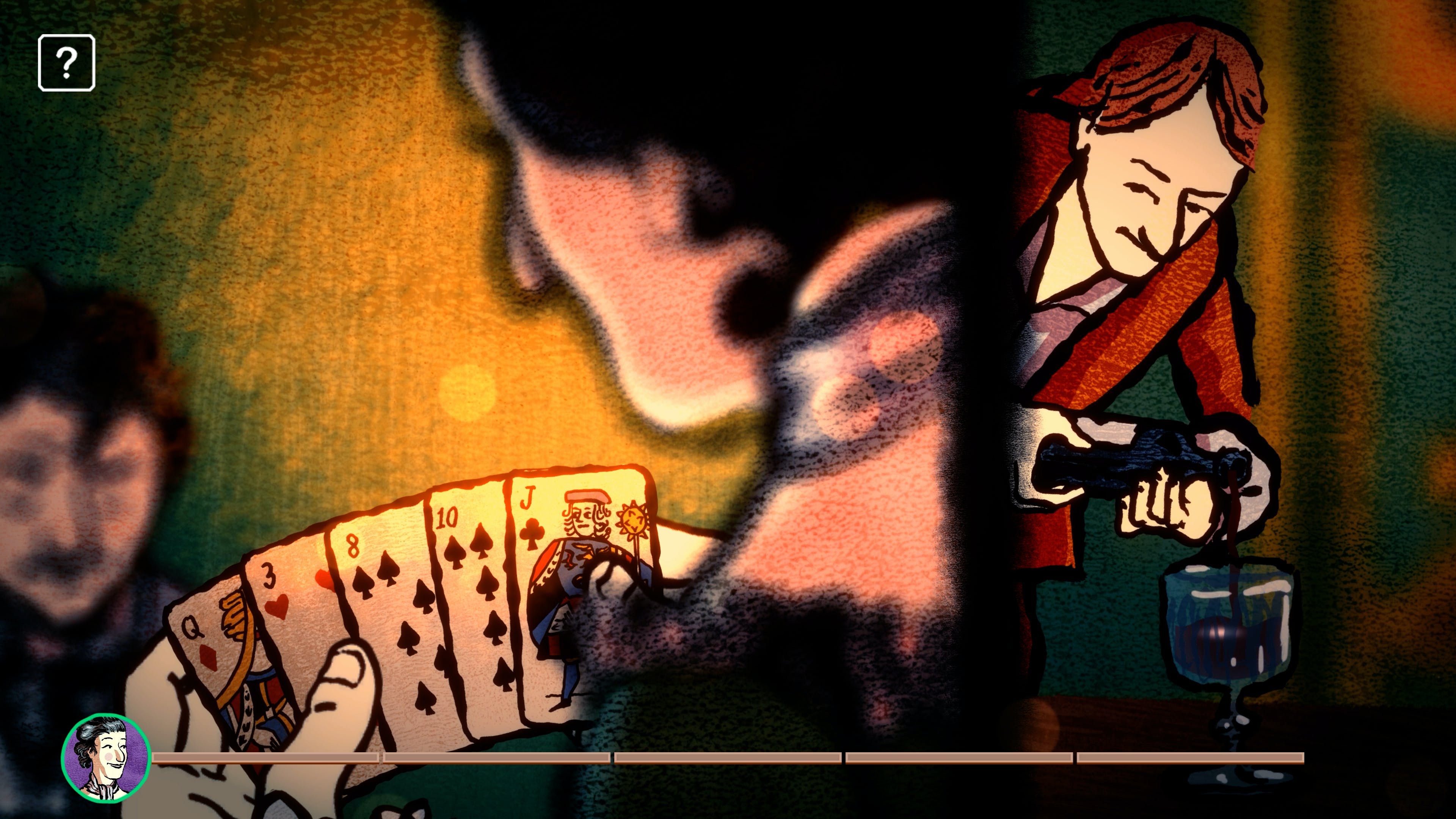 Card Shark has the creativity, challenge, and charm to make it worth the rounds but some tedious and frustrating aspects leave it just shy of greatness.

Slights of hand, strategic wine pours, calculated costumes, and a conniving set of characters: Card Shark is a game all about trickery and cheating. But the greatest trick it pulls off is crafting a delightfully twisted narrative that made every hand feel high-stakes. Developed by Nerial (Reigns) and Nicolai Troshinsky, Card Shark has the creativity, challenge, and charm to make it well worthy of my recommendation but some tedious and frustrating aspects leave it just shy of greatness.

A card shark is someone who cheats at cards to win money but in Card Shark the card aspect takes a backseat. In fact, you never know what game you’re actually playing. Instead, the mechanics are solely focused on the cheating part. Pulling off a series of moves to perform a specific kind of cheat means you win and flubbing one of the steps means you lose that round. It’s as simple as that.

Gameplay-wise cheating boils down to a series of minigames, memorization challenges, and quicktime events. On the surface that may sound a bit shallow but they’re a blast to pull off and progress in a way that helps the mechanic avoid becoming stagnant.

"Pulling off these cheating minigames is a blast."

The result is something that feels truly unique. Card Shark isn’t a card game and it isn’t quite a puzzle game either. You always know what you need to do (trick tutorials and practice rounds should get you that far) but pulling it off is a different story.

Tricks of the Trade

You learn 28 tricks over the course of the game and each one is a fun novelty. While certain matches require you to do a specific trick, usually the one you just learned, there are times where you get the freedom to pick from a few strategies.

The diversity of these tricks is by far the coolest thing about Card Shark. Tricks range from pouring a bottle of wine while spying on an opponent’s hands, making sure not to overpour while you hastily memorizing cards, to bending cards to manipulate distribution and how others cut the deck. While some moves are clearly variations or evolutions of previous tricks the way these tricks are used in different combinations kept me alert and interested throughout.

I found myself paying a lot of attention: being hyper-focused on pressing buttons at just the right time, quickly identifying high cards and committing the suit to memory, and then remembering how to communicate the information I got to my cheating mentor. It’s a simple process in isolation but when done for real it becomes a string of multistep challenges where the longer you take the more you’re at risk. As time passes your opponents’ suspicions grow. Get caught and you’re thrown out at best and arrested or killed at worst.

The art style of Card Shark is to die for and lends itself perfectly to the content. This alternate history of pre-revolutionary France comes to life thanks to Nicolai’s background in illustration, which he utilized to create a “striking visual style through monoprinting. The process involves stamping individual shapes of paint, before layering those shapes on top of each other, forming the painterly scenes you see in-game” according to the reviewer’s guide provided by PR.

Animations have a bit of stiffness to them that makes it feels like Card Shark is a painting brought to life. And there are some really thoughtful details that keep matches playful. For instance, one of the first times you pull off The Shiner, a move that has you use a reflective surface to peek at your opponent’s cards whilst dealing, it’s on a ship. As the boat presses on the reflective object you’re using to cheat starts to slide back and forth across the table. Admittedly, I would’ve liked to see more moments like this but I loved having a bit of a wrench thrown into my plans in a way that felt genuine to the circumstance.

As someone who struggled to perfectly execute cheats in Card Shark I became well acquainted with failure. Therein lies one of my biggest beefs with Card Shark. Not the failure itself but the amount of time it takes to get back into the action was often a pain.

At times, there are legitimate reasons this restart process drags. Ending up in jail and getting bailed out or ending up on the brink of death and needing to, sometimes literally, cheat death added important narrative flavor. And I get wanting to give players a chance to go elsewhere on the map or get additional practice in. Still, the end result remains: it can take a while to get back to the action, even when skipping through dialogue.

"It can take a while to get back to the action."

You need to complete scenes to progress the game. This is done by traveling to specific locations on the map and winning enough rounds to make your opponent call it quits. You don’t need to win each round to complete a scene. As long as you have enough money to bet, you can fail at least once per scene and still progress the story. On the flip side, you’ll complete a scene when your opponent can no longer meet the next bet which means betting more money can help you win more quickly but increasing your bet also heightens suspicion. If this suspicion meter fills completely, you get caught cheating and lose the scene.

I aired on the side of caution, rarely increasing my bet, so most scenes required me to win three rounds. I didn’t carry much money on me so I usually could only fail once per scene and still continue.

The lowest difficulty level decreases some of the intensity as the suspicion meter is slower and, if you fail, you get the option to skip the entire card game.

This mode is a really solid option for players like me who may struggle with executing everything perfectly but I definitely found myself wishing there was a more nuanced difficulty mode that let me manually tweak the suspicion meter speed and skip rounds instead of entire games as desired.

There are ways to cheese Card Shark to make it a bit easier. Taking notes to easily access key info or avoid having to memorize is one method (though a lot of this can be accomplished by having Hints On and clicking into them as needed since the hints give you some answers directly). Additionally, you can pause the game at any time which can help you catch your breath for a second and plan your next move without having to worry about the timer — a tip that’s straight from the developers.

"The hint system can carry you."

The hints can really carry you and I found myself leaning on them often, at least as a way to double-check that I had things right.

One of my favorite aspects of Card Shark is it’s so infused with drama, establishing early on that anything can happen and no one is safe, that I really felt like I had to win my games. Obviously, things are scripted but when I fumbled my first tricks and the results were catastrophic I actually felt responsible; that impressed me the most. I bought in completely and felt pressured to pull one over on everyone I met which made for an immersive and entertaining experience.

Admittedly towards the middle of my playthrough, Card Shark’s story seemed a bit contrived. But as I pressed on intrigue continued to build and I was delighted to get to know the characters on a deeper level. Meeting Death, personified, over and over again throughout the game added ominous and supernatural undertones to the entire experience. It lays the foundation for some particularly striking sequences.

In a game all about trickery, I adored the ways Card Shark’s story subverted my own expectations.

If you enjoy playful, well-constructed minigames and dramatic stories Card Shark is for you. There were some pain points during my journey across France but on the whole I had a good time and the experience was unlike anything I’d played before.