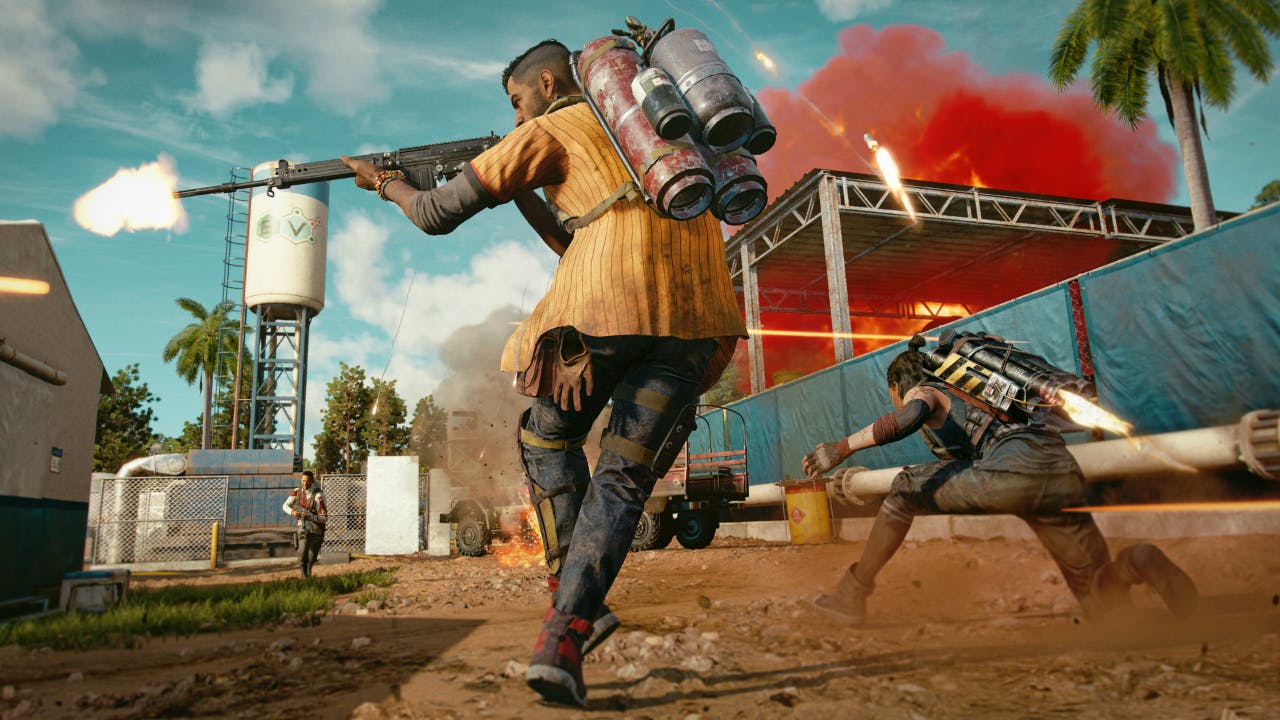 As a newcomer to Far Cry, I’ve always viewed it as over the top chaos and — at this point —a series that’s in need of a win as many feel its best may be behind them. After 4 hours of Far Cry 6 I feel more confident that this’ll serve as a fun entry point to the series in terms of its moment to moment gameplay but still a bit wary of the overall story it’s looking to tell.

Far Cry 6 is saturated in brutality. The table setting for the story is one of unapologetic carnage.  Narratively, it’s a splash of cold water; you’re immediately put into an emotional state. While some may argue it’s all shock value, I found it working: especially with Gian Carlo Esposito (of Breaking Bad) playing the main villain, Antón Castillo. Here, he’s playing a role he knows all too well: the quiet calm that cuts throats. Normally, a big bad’s monologue is eye roll inducing but in Far Cry 6 I actually find myself looking forward to it due to the strong acting.

The country Yara and specifically Antón Castillo’s regime doesn’t hesitate to kill out the gate and that instant disregard for human life immediately infuses Far Cry 6 with powerful tension that’s quickly tossed aside once the gameplay gets going.

"Story and gameplay are connected by gore."

The contrast between the serious plot and the over the top gameplay will likely underscore the entire experience but I found myself far more engrossed in the action anyway. This isn’t to say the story isn’t a major component worthy of criticism but it being spliced between blowing stuff up made me focus more on the latter.

What connects the two is the gore which can serve as personal glory when you’re launching missiles from the supremo or chaining melee attacks between grenades. The high is simple but damn satisfying.

"Narratively, you may be destroying to rebuild but the destruction is always at the forefront mechanically."

One of the first things I did as Dani Rojas was pick up a machete and my first stealth kill involved slicing straight through a skull. In first person this is especially visceral. I healed my character by staring at my own dislocated finger and popping it back into place with a crack that’s equal parts unsettling and appealing in its own twisted way.

For better or worse, Far Cry 6’s action is for the folks who cheer at the machine gun scene in Scarface. Narratively you may be destroying to rebuild but the destruction is always at the forefront mechanically.

Antón Castillo’s Yara is built on slave labor and his motivations are purely profit. He’s evil in a way that doesn’t require much thought… joining the revolution is an easy ask for me though my actual character Dani is really only fighting as a means to a personal end (at least at first).

It’s possible that more nuance appears within other conflicts during the story — especially in regards to Castillo’s son who seems torn over his role — but for now it’s all pretty black and white and painted with a broad brush.

That’s fine, most will come to Yara for a playground of gore and guns. But though Yara is fictional the issues raised aren’t completely outside of real people’s lived experiences which begs the question of whether it’s appropriate to use it as canon fodder for a fun time without deeper examination. A few hours in, I’m doubtful I’ll find anything deep here but I didn’t leave with additional feelings of concern or cringe either.

Far Cry 6 is about becoming the best gorilla fighter you can be and that all comes down to your character’s arsenal, the gear you equip, and the guerrilla (gorilla) rank you earn by completing missions. In lieu of focusing on physical traits in terms of stats and attributes, gear is emphasized.

Though cosmetics are pretty insignificant in a first person game, I’m vain and still care to look good. As a result, I was thrilled to see that you can equip gear X for the perks but give it the appearance of any piece of gear you have.

Before taking on an area you may want to equip a certain piece of gear with a perk for the job, such as fire resistant clothing, but for the most part you can lean into your own personal gameplay style when it comes to what you’re wearing.

As far as strategizing, I enjoyed scoping out areas with the camera on my phone and tagging enemies, security cameras, tanks, and more. But it also breaks down the type of bullet a specific enemy is most vulnerable too and that aspect got too granular for me to be worthwhile.

"Bullet selection strategy is too granular to be practical."

As far as weapons, you’re encouraged to make upgrades and adjustments often at conveniently placed workbenches. Whether it’s slotting different gadgets or changing the type of bullets a specific gun fires.

Again, the bullet aspect was my least favorite element especially since most encampments had multiple types of enemies it seemed like a big ask to strategically have certain bullets for certain enemies considering that planning goes out the window once things devolve into firefights.

Overall, this system is more intriguing in theory than practice. Fortunately, you can get away with ignoring these nuances but they’re still a weakness to me.

Getting around Yara is as simple as you want it to be. There are plenty of points of fast travel with more opening up over time. Other methods of transportation include a car you can call on demand, horses you can summon at certain spots, planes, boats, wingsuits, grappling hooks, and just walking.

You can put cars and horses on autodrive and enemies will ignore you as long as your weapons are holstered and you don’t get too close for too long. I will say neither feels great to use or looks particularly good. Driving in first person is awkward and the animation of bobbing up and down on the horse isn’t great especially as you stare at the basic textures that make up its mane.

Drama free movement is easy to accomplish but if you’re looking for fights along the way Yara has plenty of that too. Checkpoints throughout Yara can blow out your tires if you just drive through them, alternatively you can capture them by taking out all the soldiers and destroying the adjacent billboard. It’s a great way to get some quick action in while also being rewarded with a Guerrilla Scout who will reveal a new military target, a vehicle summon spot, and a new point for fast travel. Not to mention whatever loot is around. Likewise military targets can be taken over for rewards though these are more elaborate areas than the checkpoints.

You can bribe select military soldiers, who act as double agents, to reveal cache locations which helps build out the world.

While it likely plays a small role in Far Cry 6 the platforming is a pain when playing a key role in a mission. This was rarely an issue with the exception of scaling a mountain in which I found myself missing jumps, ever so slightly, over and over again just for a simple story beat.

The melee combat is gruesome, addictive, and one of my favorite aspects. From a good stealth takedown to a quick fix when you’re a bit overwhelmed, I just want to knock people out in Far Cry 6 and so does my trusty crocodile companion Guapo. Siccing a crocodile on someone really doesn’t get old and that initial companion pet relationship got me excited to unlock more deadly critters.

In Far Cry 6 I’m free to do my patented jank stealth where I come in quiet and open fire when it inevitably goes wrong and for the most part, it works. Combat areas are designed to give you problem solving options from convenient ziplines to unoccupied turrets waiting for you to take them over.

If there’s one fault in the gameplay loop is that it’s a bit basic, lacking in creativity when it comes to things like body disposal and enemy routes. The AI can also feel a bit uneven and the lines they say casually get repetitive really quick (“That croc belongs in the water!”). At times enemies are oblivious and at others they’re calling in back up and hunting you down ruthlessly. Some areas also feel more geared towards stealth than others and on the whole going in loud seems to be favored by design.

Two Could be a Crowd

Two player co-op is available with perks that carry over into your game but actually progressing the story can only be done on the primary player’s account. The fact that it’s basically just two Danis together is narratively weird and does make the co-op feel like a bit of an afterthought.

How well missions go will depend on how well your styles align but I will say playing with a partner led to even more chaos and ridiculous moments which could potentially be more fun but felt distracting to the overall story. Progress was made but a lot of things caught on fire along the way.

Far Cry is cheeky and explosive but things like an unlockable deadly rooster give me pause as a Latinx person in fear that culture and stereotypes will serve as comic relief and entertainment. Though in my brief time with Far Cry 6 I didn’t have many gripes in this regard other than tired puns using the name Juan (i.e a mission with Juan called Juan Of a Kind) which are more boring than anything.

"Far Cry is cheeky and explosive with the risk of turning culture into caricature."

Spanish is utilized in a way that feels mostly authentic though Dani exclaims “cono” so often I find myself praying they learn a new swear. Though I’m not completely fluent in Spanish the translations seemed solid though there were a few things that got a bit lost in translation. At one point “comer mierda” (eat shit) was translated to asshole instead though that detail isn’t enough to derail a conversation as the general sentiment is maintained.

Bigger Statements or Skimming a Surface

Far Cry 6 seems more likely to skim the surface of big topics than to make interesting statements though I did notice a few exceptions: one that I loved and one that made me wince.

The best point of writing I encountered was when Juan (who serves as a bit of a mentor to you early on) reacts to your desire to go to America saying “You think America wants your Yaran blood. The American Dream is for Americans, Dani.” It’s a small statement during an early conversation as you head back to camp but it resonated with me as a first-generation Mexican whose father immigrated here in the 80s. Powerful lines like this land well but they’re few and far between.

"Powerful lines land well but they’re few and far between."

Though later on this same character hypes up a new weapon you get by saying you can “commit high velocity war crimes” which reminded me that Far Cry 6 is about having a good time, not a thoughtful time. Unrest and real issues are a playground. I’d be lying if I didn’t say I had fun with my session but I’d also be lying if I didn’t expect some cultural fumbles to be made along the way.

Far Cry 6 is structurally what you would expect from a Ubisoft open world game but gruesome melee combat, interesting scoping tools, charming pets, and serviceable gunplay makes for an enjoyable gameplay loop. The plot is intriguing enough that I want to see it through even if it’ll only skim the surface of the serious topics that mostly serve as set dressing.