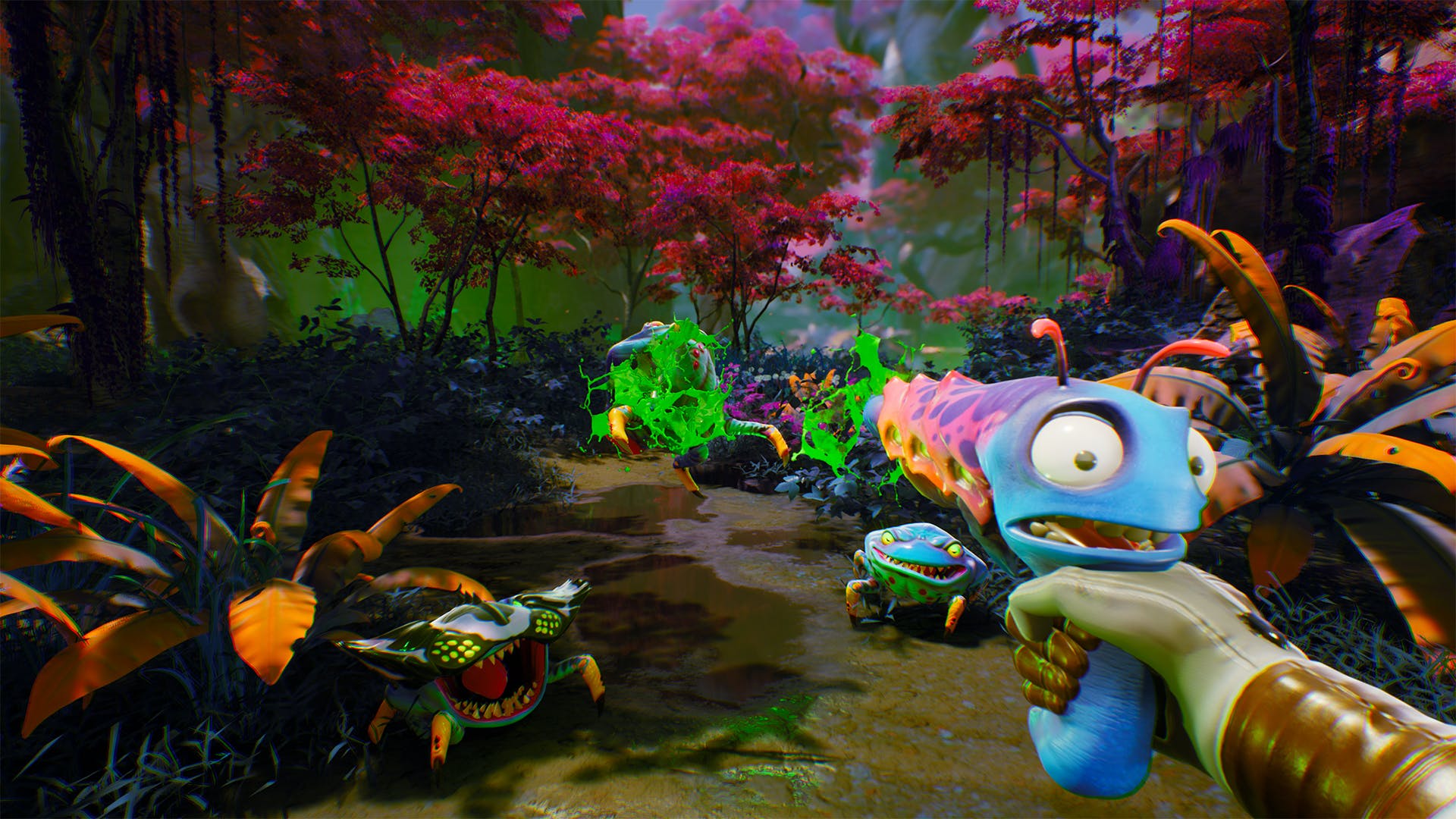 How much chatter is too much and are these weapons worth listening to?

High on Life wants to put its own goofy spin on the companion trope in gaming by giving players talking guns but how much chatter is too much and are these weapons worth listening to? I played the opening of High on Life at PAX West 2022 and while I’m still not fully convinced Squanch Games will find its dialogue sweet spot a few things make me optimistic for High on Life. The gameplay is solid and intuitive, the world is weird and gross, and that boss battle isn’t nearly as explanation heavy as it seemed in the trailer.

Overall, going hands-on with High on Life gave me a more positive outlook on the game but failed to win me over completely. Still, my conversation with CEO and studio cofounder Justin Roiland and Chief Creative Officer Mikey Spano left me genuinely intrigued by the narrative structure and ways High On Life aims to evoke elements of Metroid, Mega Man, and (perhaps most surprisingly) Uncharted.

Gunning for a Reaction

My 30 minutes of High on Life was underscored by absurdity and a lot of commentary from my gun, Kenny, who is voiced by Justin Roiland and sounds a lot like Morty — minus the neuroticism.

Like with most previews, I spent a lot of time seeing what I can get away with in a world. While the opening of High on Life has a fairly linear funnel, which is to be expected in a tutorial area, Kenny is more responsive and specific than I expected. He commented on things like my constant trigger pulls on NPCs, even at times when firing wasn’t really an option. Likewise, other NPCs reacted in goofy authentic ways to my antics whether I was clearing out an entire area or running full speed as if to book it from the situation entirely.

The Swing of Things

Gunplay is simple, serving as action fodder in the opening of this adventure. It’s approachable to anyone who has shot a gun in a game before but that also means the gunplay, on its own, isn’t particularly remarkable. Nor does it need to be in a game like this. I imagine those additional layers of mechanical excitement can be found later in the campaign and, luckily, I got a small taste of that through Knifey: the Knife that also works as a grappling hook.

Admittedly, I love grappling, I love stabbing, so I loved Knifey’s functionality even if his cartoonish bloodlust is a bit much for my taste. The grappling hook is fun, easy to use, and can work as a way to get around in combat arenas which is a great way to spice up otherwise straightforward gunplay.

Even early on, exploration was enticed by chests just out of reach or hiding around the corner. I can see where light environmental puzzles may make for some fun challenges as things progress, especially given the metroidvania elements of High on Life.

"It's kind of Mega Man-esque where you get to pick the boss you want to go after. - Justin Roiland"

“Any of the new guns you get have cool special abilities that [provide a] sort of metroidvania kind of progression loop,” says Roiland, where you can return to old areas and uncover more than you could before. After the opening portions, you eventually get to the point where “it's kind of Mega Man-esque where you get to pick the boss you want to go after and that boss will have a specific gun you rescue.” All of which also impacts player story.

While some watch High on Life’s trailers and feel the brand of humor is exactly what they’re looking for, others have found it a bit abrasive and tonally repetitive. Most of what I played in my hands-on time were jokes I heard before from the marketing materials so it was tough for me to gauge how I’d react if I heard them for the first time within the context of the game instead of a snippet on Twitter.

The problem with the marketing so far was best summed up by my friend and peer Eddie De Santiago who remarked that watching High on Life’s trailers felt like a friend showing you a video on their phone while they waited for you to laugh. If you do, it’s a great moment between the both of you but when the humor just hangs there it’s a tense, almost uncomfortable experience.

There were some amusing beats in my time with High on Life, two alien goop subway workers making you choose who is hotter to move forward is funny in the way it combines the foreign with the familiar, but overall I was far from in stitches over any particular gags.

The Rick and Morty Of It All

Comedy-wise, the Rick and Morty DNA in High on Life is clear: from the dark humor to the absurdity. This is a huge draw for fans but where does it leave those who are fatigued by it or fell off the franchise? Here’s what Justin Roiland had to say.

“It's so different. It really is like. Rick and Morty is me and Dan [Harmon]'s. We’re peanut butter and jelly; it's a good combo. But, if Dan’s peanut butter, I feel like it's been more peanut butter lately which is fine. I'm a fan of his cerebral [angle on things] but the silliness has maybe not been as on display as it was in earlier seasons. I'm certainly a big idea person, breaking story, really complex, crazy narrative stuff. But I also just love silly stuff. And this game is [that]. I think if you're a fan of early Rick and Morty, like season one and two, [you’re] gonna be like, ‘holy shit, this is fucking scratching that itch… If you're fatigued on Rick and Morty, if anything this will be a breath [of fresh air]. You’ll be like, ‘oh, this is, this is awesome. This feels like what's maybe a little missing right now in Rick and Morty.”

"If you're fatigued on Rick and Morty this will be a breathe of fresh air. This feels like what's Rick and Morty is missing a little right now - Justin Roiland"

As someone who falls directly in that camp, Roiland’s comments piqued my interest in High On Life as someone who adored Season 1 and 2 of the show. And at the end of the day what discouraged me from keeping up with it was how toxic the fanbase became, not the show itself. I’m curious to see if High On Life will be newstalgic to me as an old fan or if it’ll solidify the fact that I’ve moved on from that brand of humor.

I played the opening of High on Life which is, unsurprisingly, a tutorial-heavy section. But once that ends the amount of explanation is going to die down drastically, with Roiland comparing the chatter to titles like Naughty Dog’s Uncharted. Instead of climbing rocks with Sully, you’re doing bounties alongside whatever gun you have equipped. The gun isn’t just a weapon; it’s your buddy.

The big disconnect I feel, given that comparison, is the fact that you are a silent protagonist so that back and forth feels a bit one-sided. Sure the NPCs you talk to serve as that other side of the conversation but I struggle to imagine developing as deep of a relationship as I have when I played with a cast of characters.

That’s not to say you can’t find charm and friendship between a silent lead and a chatty comrade. Again, a Naughty Dog comparison comes to mind with Jak and Daxter. But I imagine how annoying it’d be if Daxter’s dialogue was dialed up too high and this early on I’m still nervous this will be the case with High on Life, though the team seems confident that they hit the mark.

"It’s tough to determine if High On Life will have the narrative structural diversity to keep conversations fresh and interesting. "

So where does banter end and pestering begin? I think of games like Night School’s Oxenfree and realize how much relationship building can benefit from quieter moments. With such a brief demo it’s tough to determine if High On Life will have the narrative structural diversity to keep conversations fresh and interesting.

It does help that “there's almost no repeated dialogue,” says Roiland, “this isn't gonna be Simpsons Hit and Run where you're hearing the same shit over and over and over. [To clarify] I'm not shitting on that game. I actually really love that game. But we recorded a lot.” Spano expands saying there are “multiple versions of every line. So if you do miss it the first time, there's a reminder, that's not gonna be the exact [same thing]. If you stand there and listen there are so many different versions of that line you're hearing.”

One of the more compelling aspects of High on Life is the fact that each gun has its own personality which will change the conversations you have throughout the game; this is a fascinating approach to branching narratives, even if they all end up in the same place.

“There are multiple big moments in the game that are completely different depending on the things you do,” says Roiland. “But there’s no bad ending or good ending [or multiple endings],” clarifies Spano.

The Vibrant and Grotesque

From squishy sound design and toxic sludge to brutal stabbing animations, there’s a grossness to High on Life that’s made playful by its vibrancy. The cartoony art style is a counterweight to violence. But in a game where an alien cartel is deadset on enslaving the human race because their bodies themselves create the ultimate high all that’s profane feels right at home.

In short, the opening worked better in practice than it showed and I left PAX West looking forward to seeing whether Squanch Games pulls off what they’re promising when it comes to intriguing story differences and the perfect amount of chitchat.