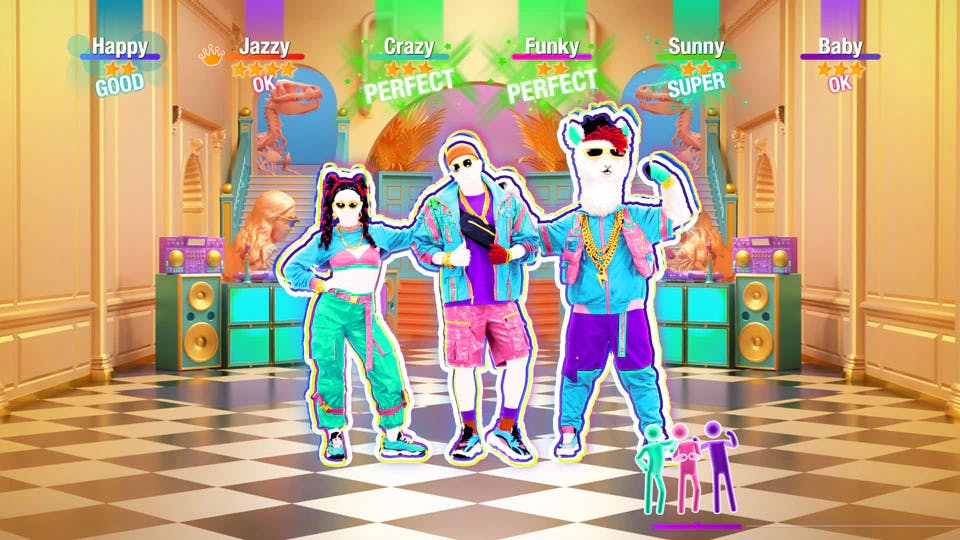 It has been a few years since I’ve checked in with Just Dance and, unsurprisingly, it’s largely the same game. If you’ve played any Just Dance in recent history you know what you’re in for but there are a few things that stood out to me as a semi-lapsed player.

The quick play mode (introduced in Just Dance 2021) continues to be a welcomed addition allowing players to immediately jump into a random playlist. And being able to craft your own lists is useful as I was a bit disappointed by how sparse the initial curated playlists are, especially culturally.

As usual song visuals vary in theme and dancers with tracks like Mr. Blue Sky being among my favorite in terms of creativity as it looks like a storybook come to life.

The tracklist for 2022 is one of my least favorites in recent history. Choreographies like the one for Ciara’s Level Up are a saving grace but also that song came out a few years ago so it’s hardly fresh despite its resurgence on TikTok.

It feels like the folks selecting the annual Just Dance tracklists don’t have their finger on the pulse. This may be due to restrictions in terms of licensing and deadlines. Still, these tracks often feel like a random, somewhat recent, collection of songs instead of something that’s representative of the most recent calendar year.

Just Dance remains a fun formula if you’re looking to get moving through dance but I want to see more iteration and notable improvements going forward. It feels like I can be shown different Just Dance games over the last few years and too easily mistake them for one another.

Small quality of life updates would go a long way: such as the option to redeem coins in a way that’s faster and more automated. The rewards you get for dancing, especially the cosmetic ones, feel tired at this point though I’m not above changing my dancer card frequently with whatever I do end up earning. And I like taking on the world stage with my co-op partner but I wish there was a way for us both to show up on the leaderboard. The list goes on and on.

"It feels like we are paying for new songs rather than new ideas."

Overall though, it felt good to jump back in, move all the furniture in my apartment back, chug a few glasses of water throughout, and destroy my move/exercise goal on my Apple Watch with a peak heart rate of 130 BPM. Just Dance has always been a welcomed workout (and a bit of a hazard, I knocked over my Dunkin Donuts iced coffee and spent a solid chunk of my playtime mopping my floor, oops).

At the end of the day, I come to Just Dance to do exactly what the title instructs. Ubisoft did the assignment but the distinction across these annualized titles is so subtle it rarely feels exciting, even to long time fans like myself. At this point, it feels like we are paying for new songs rather than new ideas. This is increasingly frustrating when an additional 700 tracks are locked behind Just Dance Unlimited, a subscription that costs $24.99 a year on top of the base price of $49.99 which albeit is cheaper than most AAA titles. I can’t help but feel like Ubisoft is coasting on a good idea they had years ago and yet I’d be lying if I didn’t admit to sticking along for the ride indefinitely.