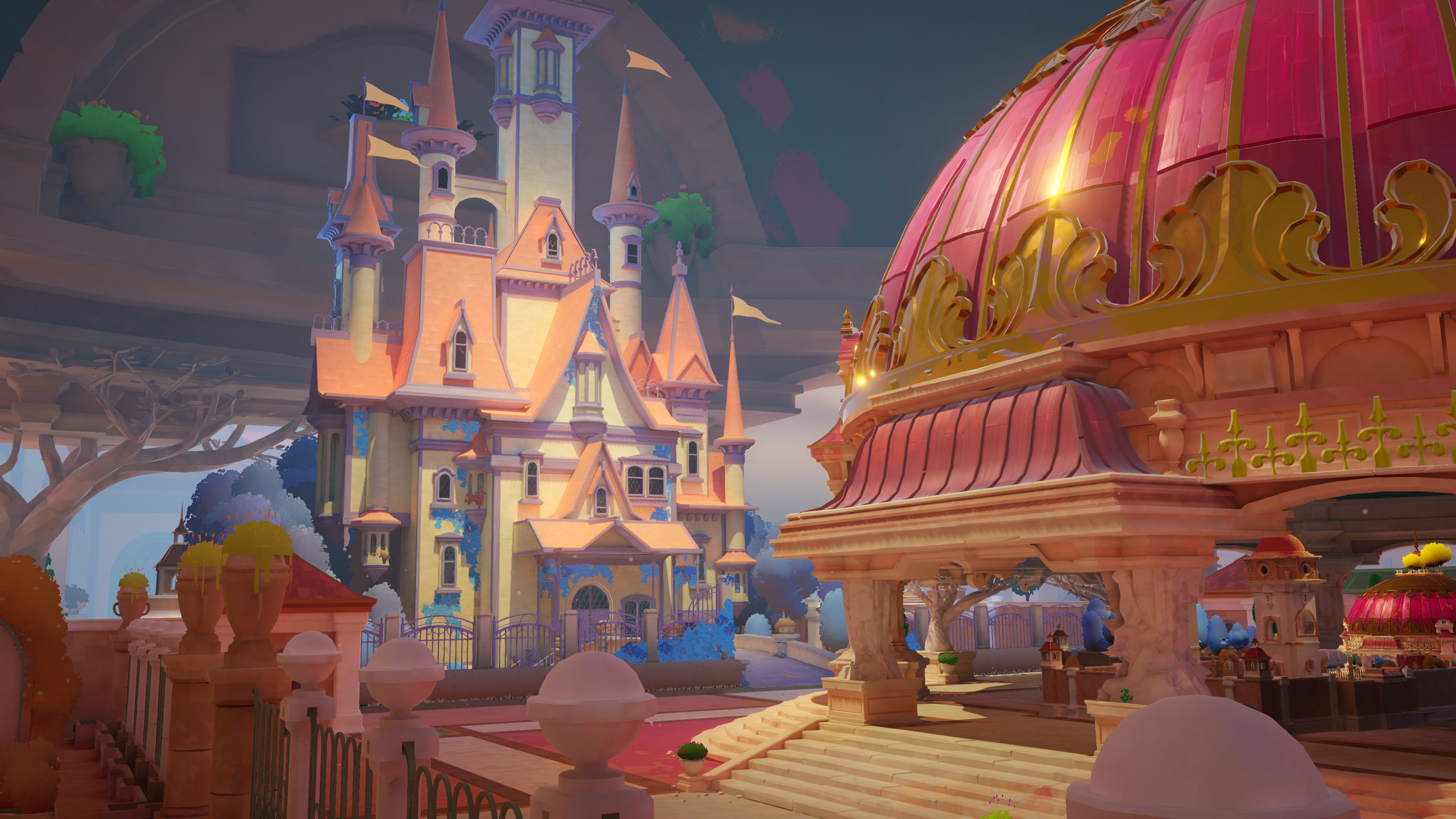 A wonderful puzzle game set in an eye-catching world, Maquette excels in its ability to walk players through a love story while making every challenge relevant to the romance.

The little things aren’t always so little. Whether it’s spilling a cup of coffee on a stranger’s sketchbook and ending up with a boyfriend or taking that key you just used to open a door and transforming it into a giant bridge thanks to, what’s essentially, a magical diorama: given the right parameters, what’s small can easily become big. Maquette is instantly weird in its world but charmingly familiar in its exploration of relationship dynamics all on top of being one clever first-person puzzle game.

Like Russian nesting dolls, the inside is an identical but smaller version of what exists just outside. Each chapter has its own area with a building at the center. Inside that center building, is a scaled down diorama of the life-sized world (in some instances you’ll interact with a giant world just beyond that).

Interactable objects have a convenient shimmer and, in some cases, a small beacon above them making them easier to spot. Plus the crosshair will change its icon to indicate it can be picked up.

You’re invited into Maquette’s world with “Hello Sunflower” delicately scrawled in illuminated ink across the star-filled night sky being the first thing you see. It was an invitation I accepted immediately because being dropped into a beautiful purple pastel garden, with quotes in the air guiding me as a haunting cover of San Franciscan Nights swells in the background, was completely up my alley.

I adored the times in Maquette where areas bloomed like luminescent drawings before my eyes as I walked through the world.

Sketches are used as cutscenes in a way that’s both a visual delight and a window into Kenzie and Michael’s relationship. Creativity and wonder is at the crux of their dynamic brought together by their shared sketchbook; a book you essentially spend the entire game exploring.

I would’ve been completely immersed in those initial scenes but the sound of the footsteps distracted me. When the material underneath my feet changed it didn’t sound right. Also when I ran for long periods of time or took quick steps the speed and impact of my footsteps felt misaligned to me.

"The world of Maquette was an invitation I instantly accepted."

Fortunately bigger moments, such as opening doors, had a satisfying auditory weight to them as metal gears turned and old doors creaked slowly.

Most of my sound design related gripes melted into the background for me as I focused on puzzle solving. Still, things like the sound of dropping objects seemed off at times especially when placing them within the diorama. Maybe the loud thud of dropping a small staircase inside the diorama is just the sound of it falling a few feet from me in the real world.

A New Way to Look at Things

Puzzles center on manipulating scale by changing the size of objects, going to bigger or smaller versions of the world, and exploring the environment in new ways. While additional layers are introduced, such as holding crystals to get through matching color barriers or throwing objects out of windows, the core always remains and makes almost every puzzle feel fair.

Maquette manages to teach you the language of its design and its difficulty scales well. And, for the most part, it respects your time. Each chapter brings you into a new world with several areas, but areas you don’t need to access to solve the next puzzle are intentionally blocked off and for good reason. It was just the extra bit of direction I needed to feel like I could take on the next challenge.

Even the existence of the diorama is helpful as a convenient overview of the space, in addition to its obvious role in object size manipulation.

For me, one of the tenets of good puzzle design is making it easy to go from having an idea to trying out an idea and in this sense, Maquette is mostly successful. My biggest gripe is that the option to reset actually resets the entire chapter, not just the puzzle you’re on.

While most puzzles can be solved within a few minutes (once you know the solution), this is a pain that discouraged me from restarting even when I felt stuck: including the time my character was quite literally stuck in an abyss between a few piles of wood and the wall of the house I was trying to enter.

Technical hiccups were never enough to ruin Maquette for me but it is worth noting that I had a few frame rate drops as well as instances where objects felt as if they got stuck on the environment.

In addition to these moments, I was also sometimes frustrated by how perfectly you need to set some objects down to get them to work. On the whole, staircases need to be set down flat, as any slanting can make them too steep to climb. Admittedly, this choice does get justified by some of the later puzzles that involve manipulating inclines but it does create a few small annoyances in earlier chapters.

Maquette is brilliant in its ability to make the gameplay constantly reflect the story, not just in the environments you’re asked to explore, but in the way you have to move through the space. For instance, there’s a line in the story that says “your little quirks weren’t so little anymore” right as I approached a giant, unclimbable set of stairs. It was a great physical manifestation of the feeling.

Maquette’s moment-to-moment writing manages to realistically capture a relationship while adding just enough charm to make me feel for these characters.

And lines like “Our first year together was epic. It would be easy to chalk that up to naive hopes… But even today I feel what we had back then was special” grounded the couple as more than just infatuated with each other.

Maquette is at its height when it’s capturing the more tumultuous moments of this relationship. The subtle yet poignant strain was well executed. The bad days of the romance weren’t in massive breakdowns or huge betrayals; it was the small flaws each other had.

"Maquette is at its height when it’s capturing the more tumultuous moments of this relationship."

Romantic conflict in Maquette was never a burned down house. Instead, it was slowly peeling wallpaper in an old bedroom: annoying, easy to overlook at first, but eventually it becomes too big to ignore.

Like sketches to a drawing, conflict starts out small and quick. And in a game that’s all about scale, that’s a fantastic story to tell.

Without careful writing, anger can so easily veer into cringe. But I never felt that in Maquette. Instead I felt seen. I thought about all the times I’ve seen these fights play out before, in other mediums, among my family/friends, and even in my own relationship.

"Like sketches to a drawing, conflict starts out small and quick. And in a game that’s all about scale, that’s a fantastic story to tell."

Of course, the story isn’t all flawless execution. While making gameplay mirror the narrative creates a unified experience within Maquette, sometimes it’s a bit too on the nose. For example, during a rough part of the relationship, Kenzie remarks on the cheap salt and pepper shakers “are a good start” and then later she buys really expensive salt and pepper shakers as an eye-rolley act of rebellion.

Without getting into spoilers, these shallow threads become increasingly dull at best and cliche at worst in Maquette’s final chapters. They dragged mechanically and narratively. In some ways the areas and puzzles did reflect the melancholy and instability of the situation but it made for some of the weaker gameplay and storytelling.

"Some connective threads are a bit too on the nose."

Kenzie pouring her heart out didn’t pull me in because those wires weren’t attached to anything. All of this is to say, Maquette does love and romantic conflict a lot better than individual conflict and self discovery. The catharsis didn’t heal me and in some ways it wasn’t meant to. I can accept that creative decision but it failed to elicit anything from me emotionally and served to frustrate me a bit in its puzzle – of course, that component will always vary from player to player depending on how hard certain challenges are for you.

While the ending left me unsatisfied, none of Maquette’s late game flaws are enough to undo the brilliance that came before.

A wonderful puzzle game set in an eye-catching world, Maquette excels in its ability to walk players through a love story while making every challenge relevant to the romance.