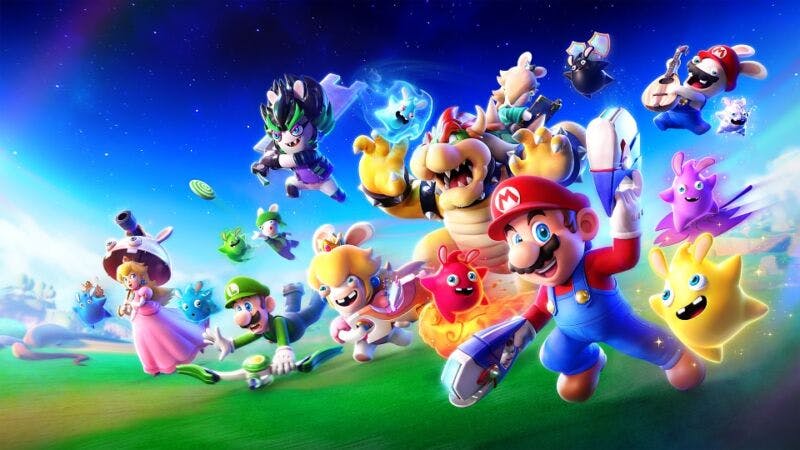 Mario + Rabbids Sparks of Hopes is another approachable, well-designed turn-based tactics game that oozes charm but it has some issues.

Mario + Rabbids Sparks of Hope is more Mario + Rabbids but adds some extra layers of freedom and experimentation to the battle system. The combination of enjoyable turn-based tactics, RPG progression, and fantastic Spark abilities makes being a completionist its own reward.

According to the in-game clock I’ve played 16 hours of Mario + Rabbids Sparks of Hope. During this time I’ve completed two worlds of the game: Beacon Beach (at 89% completion) and Pristine Peaks (at 67% completion). At the time of writing, my story progression is at 36% meaning I’ve played almost half of the experience. My review ethos is to only review games I’ve beaten, with a few exceptions. That being said, I wanted to share my thoughts at embargo with the hope of finishing the story and review by the end of the week.

Sequels all come with their own baggage and expectations. In the case of Sparks of Hope, there’s the question of whether or not lightning strikes twice and, overall, I would say it does — I absolutely adore Sparks of Hope but it’s not without its shortcomings.

Let’s start with the general construction of what to expect and ways Sparks of Hope feels distinct from its predecessor. The setup is a classic hero tale. Cursa’s evil force is wreaking havoc on the universe, consuming the Sparks aka Luma Rabbids. It’s up to the team of Mario and Rabbids characters to clean up the Darkmess and save the universe.

On the battlefield, turn-based combat remains but movement is vastly different. You are still restricted to a field of movement, that can be expanded/moved if you jump on a teammate's head, but it’s an open field instead of specific tiles. And best of all you can move around as much as you want. Firing your main weapon will lock your position until your next turn but before you fire that shot you can move everyone at will.

This freedom provides far more options per turn, especially as the area of effect for your abilities expands. For instance, I can walk each individual team member as close as possible to each other before using Rabbid Peach’s Heal ability so that I can hit my whole team with it.

Voice acting is a welcome addition to the franchise though it’s a mix of VO and text-only lines. The newest Rabbid to join the team, Edge, exudes emo/Final fantasy energy and I am here for it.

Besides the movement freedom, the Sparks are my favorite aspect of the game. Saving them provides you with unique abilities in battle and (some) exploration outside of battle. These abilities are so cool and exciting to try out. A few have really obvious use cases such as providing elemental damage buffs but others are more creative such as turning invisible.

At the point I am in the game, each hero can equip two Sparks. It’s a blast to figure out what combo of Heroes and Sparks you want to roll with but all the options also mean constantly fiddling in the menus which slows down the action. The monotony of shuffling discourages experimentation to a degree but folks who enjoy thoroughly planning their battles will get a lot out of this. Still, a “best loadout” auto selector would be appreciated since most of the levels let you use whoever you want.

Outside of practicality, the Sparks are adorably derpy and I love that.

Frustrations and Room for Improvement

The biggest knock against Sparks of Hope is it doesn’t perform as well as its predecessor. The art direction is playful but the environmental details don’t always support that vision. At times, they feel muted.

My biggest frustration with Sparks of Hope so far is the load times. There are load times for almost everything but most notably opening any main menu. Sometimes these loads are just a long transition screen (1-1.5 seconds) but other times they’re as long as six seconds. I know I’m spoiled by next-gen load speeds but in game where you’re constantly in menus to swap out teammates, spend skill points, level up Sparks, change Sparks, look at the map, etc, you really feel those loads.

After a while, you learn to live with it but it’s hard to get used to. And I can’t help but be surprised that there aren’t added incentives or special challenges related to finishing battles under a certain amount of turns.

Tactics games are about getting the most out of your turn and there are times where moves line up pristinely in Mario + Rabbids Sparks of Hope. Raining down fireballs onto enemies, causing them to run around, and then taking them down with Luigi’s Steely State is unmatched. One of my favorite examples of this occurred when a heavy enemy leapt into the air to slam down on my team only to be shot right out of the air.

Most of the variety in Mario + Rabbids Sparks of Hope stems from a slow, steady progression of encountering new enemy types, getting new sparks, and duking it out on diverse battlefield layouts. It’s safe but incredibly well executed. Occasionally you’ll get a bigger shake up with inspired challenges such as fighting nothing but bob-ombs: pushing you to use your dash/toss bob-omb move in strategic ways.

Mario + Rabbids Sparks of Hopes is another approachable, well-designed turn-based tactics game that oozes charm but it has some performance and quality of life issues. Additionally, I’d love for Mario + Rabbids to offer more challenging content outside of just increasing the difficulty.