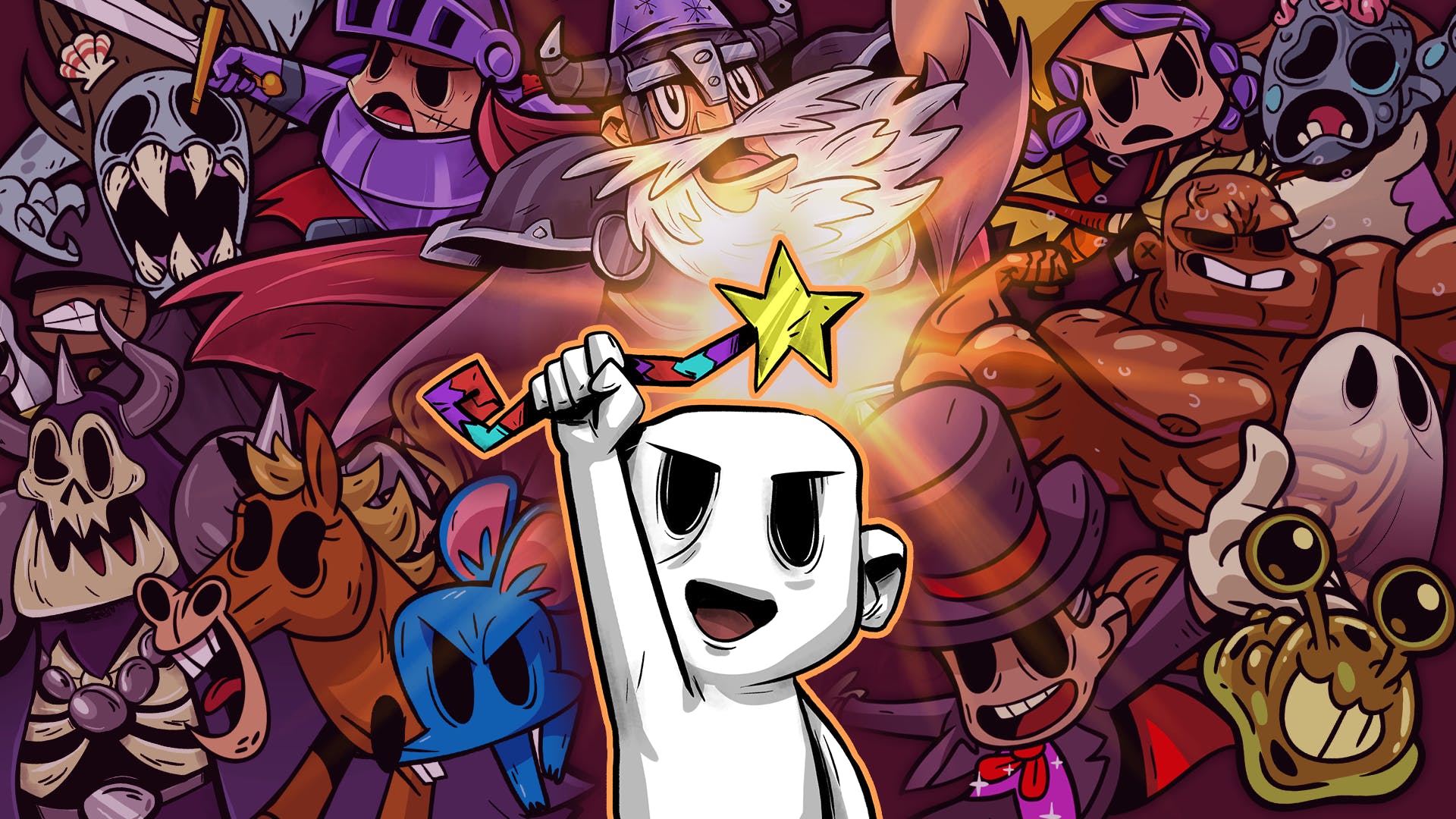 Nobody Saves the World is a fantastical take on the action RPG genre that turns a traditional grind into a series of challenges where the ultimate reward is finding a new favorite way to play. On the surface, it’s another dungeon crawler riddled with baddies but its real strength lies in turning run-of-the-mill combat into puzzles where the solution is finding the ultimate combo of creature form, abilities, and attacks.

You play as Nobody, a naked humanoid with big black eyes who can’t remember a thing. Early on Nobody takes Nostramagus’ wand, who has mysteriously disappeared, and embarks on a journey to find this powerful wizard and stop the calamity that threatens the world.

With this wand comes the ability to change into different forms ranging from a rat and horse to zombie and bodybuilder. Ultimately your goal is to retrieve gem shards from towers but unlocking those requires stars which you get by completing quests ranging from dungeons and NPC missions to the more granular tasks related to a specific character form doing a certain task a number of times. These form quests start easy, such as doing your default attack 15 times, and scale up in quantity and specificity.

They may sound overwhelming at first but what works so well here is that you constantly have something to work towards at all times and everything you do has a positive impact in terms of progression. Nobody Saves the World takes grind and turns it into a series of challenges that work like Russian nesting dolls: each small quest fits inside the next, larger goal. It’s a positive feedback loop that’s intoxicating.

"Each small quest fits inside the next, larger goal."

This smart progression system is reinforced by optional mechanics like the ability to buy infinite quests with in-game currency that continuously run in the background like getting XP for killing enemies or picking up health items. Small quality of life choices go a long way too, such as the fact that dying in a dungeon still keeps all other progressions intact so you can theoretically return more powerful than you were when you failed.

A New Form of Fun

Nobody Saves the World is all about experimenting with your forms. Completing quests for each one is how you can increase a form’s letter grade, which originally starts at F. New form abilities come as your grade increases and eventually new forms unlock once you hit a certain grade, working your way up the character form tree. This means getting new forms requires you to spend some time with previous forms.

This structure creates a freedom I never would’ve gotten to experience if left to my own devices. Nobody Saves the World achieves this by never requiring you to spend too much time with a single form and by letting you mix and match across over 80 form abilities that you slowly get more and more access to. This let me take my favorite abilities with me while also picking up new ones as unlocking/leveling up new forms means more abilities to choose from. So while I personally didn’t play much as the Magician I was able to take their ability to spawn familiars who fight for you in battle and use it on anything.

Not every combo was a winning one, a few character forms never clicked for me, but on the whole I discovered things I never would’ve if it wasn’t for this smart design. Being forced to give the Necromancer the Monk’s Holy Light for the sake of doing the move X amount of times while having a x3 attack buff made me realize that was a damn good combo; it was one I used for the rest of my playtime.

The moment I was able to make my slug fire arrows I was enamored with this game. There are practical use-cases for specific loadouts, of course, but logic aside it’s fun as hell to add a mermaid tail slap to an egg and slime to a necromancer. It’s the kind of playfulness people know and love Drinkbox for and that joy is alive and well in Nobody Saves the World.

Doofy details infuse Nobody Saves the World’s design with personality. One of my personal favorites is the fact that, when facing the player, the bodybuilder character moves his pecks up and down but when facing away he moves his booty cheeks. It’s so dumb and I love that someone animated it. In general, the animations and general character design create a derpy charm to the world that pairs beautifully with the oversaturated colors that make even a world-ending calamity look appealing.

I’ve never been a big fan of Drinkbox’s humor but I think the jokes here are on par, if not better than Guacamelee 2. A few moments really made me laugh and even played out jokes (such as quips about the press not getting paid well or memberships being full of hidden fees) were still fairly amusing. There are also some cute easter eggs throughout the adventure that were fun to spot.

"Doofy details infuse Nobody Saves the World with charming personality."

As far as the story itself, it wasn’t particularly compelling though it gave me enough questions to keep me curious up to the end. The themes were interesting but the exploration of them was pretty shallow. Randy, Nostramagus’ obnoxious understudy, was written as overly annoying and even his more redeeming moments felt hollow. The relationship between Nobody and Randy evolves in a way that feels really rushed and unearned. Ultimately, this isn’t a game I play for the story but it was good enough to act as a backdrop to the action I am actually here for.

Co-Op Is the Ultimate Combo

In a game all about synergy between forms, form abilities, and the challenges at hand having, another person to synergize with only enhances what Nobody Saves the World does well. I played the first few hours alone before having my partner join me and, to my surprise, he loved it as much as I did and stayed the whole way through.

Our 17-hour adventure flew by and taking on dungeons with someone else was a great way to avoid the frustration of difficulty spikes and the progression loss that can come when you die between areas or before finishing a dungeon. It was very rare for both of us to die before one of us was revived (this takes 10 seconds) so we didn’t experience much friction. Another benefit is we were able to unlock forms fairly quickly and if one of us was struggling to accomplish a form’s quest we could both take on that form and work towards a shared goal.

But circumventing difficulty isn’t the only reason co-op is the way to go. What I really loved about our playthrough together was having someone to strategize with. We’d recommend builds to each other and sometimes picked abilities or forms that complimented one another: whether it was range vs melee combat or just covering our bases when it came to our ability types/status effects.

I still recommend this game solo but that recommendation is so much stronger as a co-op experience. With that said, it’s a shame there is no local co-op (at least at launch).

As far as online connectivity, things were mostly good. My partner and I played on a base Xbox One and an Xbox Series X, respectively. Both of us were using the same wifi in our apartment for it. We did have a few stuttering issues but during our entire playthrough we only had 3 hard crashes/freezes. Of those crashes, only one of them impeded our progress. In that case we reached the end of a dungeon, before the main battle where it saves, and when we restarted we had to also redo that dungeon. That was a little disheartening but we recovered quickly enough that I didn’t hold it against the game, though the rest of my playthrough did have a bit of underlying fear as a result.

Other than that my only issue with online multiplayer is that, despite us each having our own screen, we couldn’t go too far from one another. The camera primarily follows the main player and if the guest is offscreen for more than a few seconds they’re killed.

All Around the World

My biggest gripe with Nobody Saves the World is what a chore navigating the map is, especially in the second half of the game. Some of the design decisions pay homage to tradition, but to a fault. For instance, fast travel is only possible from one telepad to another but the nearest telepad is often several screens away with all of these areas being full of enemies. This annoyance is exacerbated by the fact that, even on Series X, there are small but noticable loads between big areas.

All of this would be fine if there were simpler ways to track quests and plan ahead but by the second half of the game I was stuck hunting for what to do next as every dungeon and area of the map has a recommended level associated with it.

The act of clearing dungeons and doing quests to help out townsfolk was always a blast but having to ping-pong around the map with limited fast travel options was inefficient and felt like an awkward stopgap between the fun I was having. Fortunately, this is also the part of the game where you can purchase an infinite quest where you gain XP for moving. Suddenly walking didn’t seem so bad but even this was sold a bit later than I would’ve liked.

The procedurally generated dungeons aren’t particularly compelling on their own but what makes them engaging are the dungeon modifiers you can come across. Modifiers can be as simple as the dungeon being dark or as complex as all attacks do 999 damage (spoilers: I still haven’t finished that one yet and thank god you don’t need to in order to roll credits).

For every dungeon modifier, there is a number of solutions beyond “getting good” which helps make things more approachable and interesting. For instance, a dungeon with no health picks is intimidating at first until you remember you have passive abilities that can regenerate health using mana or regain health as you do damage.

Forms go further than combat and it adds a new layer of intrigue to them. Quests from NPC characters often have a puzzling layer that involves using a certain form or equipping your character with certain abilities to accomplish a task. For instance, early on you meet a horse that has a quest marker but has no interest in speaking to you. Immediately I had that light bulb moment of knowing I have to come back as a horse. Once I unlocked that form I made my return and was met with a goofy little storyline and some XP for my trouble.

Other puzzles are a bit more complex. After a few failed attempts at the shooting range where you have to hit every target we were ready to call it an impossible task until we got an ability that let us fire a rocket with sizable splash damage. Before that solution, we tried to use the Rogue form instead of the Ranger due to their knife throwing ability but that wasn’t allowed. So while some quests may have very obvious answers, others require a bit more trial and error and those are satisfying to figure out while also providing progression.

Every RPG has some grind but great ones make it so incentivized and enticing that it doesn’t feel grueling. Nobody Saves the World achieves this through its fun, customizable forms and a thoughtful progression system.