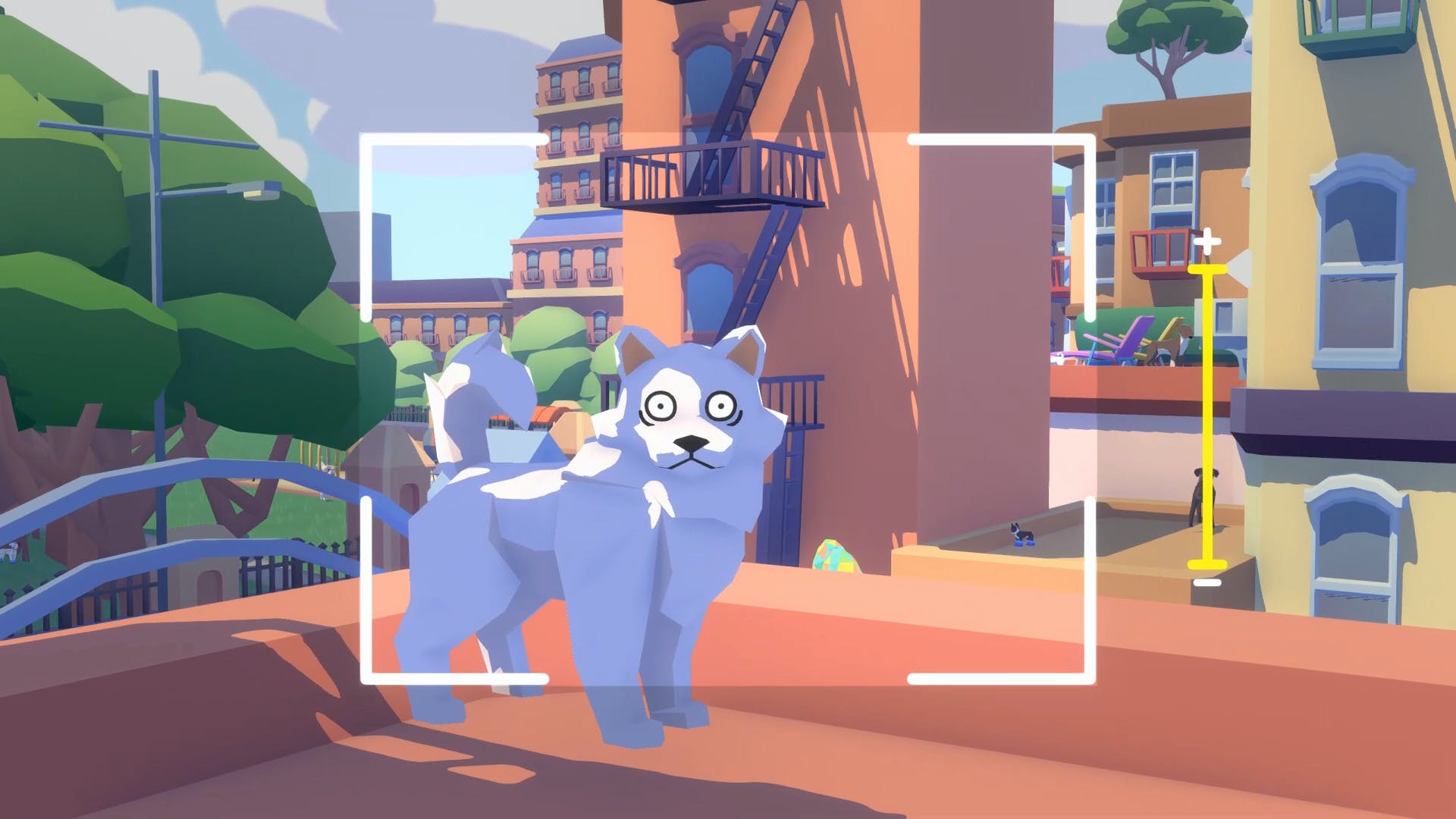 Taking pictures of dogs in goofy scenarios and cute costumes feels like a formula for success but Pupperazzi’s awkward controls and frustrating design choices hold it back despite how cute dogs are in raincoats.

The instant I started Pupperazzi something felt off. In fact, I spent the early minutes of the game trying to adjust it in the settings (with little success). I did find decreasing the Look Sensitivity made things a little better but ultimately I found the way you move and aim the camera was too slippery to easily and comfortably line up the shots I wanted.

Simplified Controls, intended for those new to first-person games or prone to motion sickness, does help a bit but at the cost of freedom since you can’t move with the camera when this is toggled on. Additionally, this option limits vertical aiming when walking around and should cause players to automatically crouch in camera mode but when I tried it my character would crouch then stand right away forcing me to manually crouch if I wanted that angle. Honestly, the culprit for movement feeling askew may be a bit of input lag though it’s hard to know for sure what makes everything feels so imprecise (and even a little nauseating).

Pupperazzi is a scavenger hunt where the camera is a documentation tool first and an art tool second. The core gameplay loop revolves around photography objectives such as “photo of a dog with a sandcastle” or “photo of a biking dog with the pixel lens.” Hunting these photo-ops down can be enjoyable at times but the clunky way these objectives are tracked and completed gets in its own way.

For instance, I had to take a photo of a dog pulling off a star trick on its skateboard. I did it and opened the menu to confirm the objective was highlighted as completed. And when it wasn’t I tried to figure out why the game didn’t accept my shot and it turns out it wasn’t close enough which was weird as other objectives specify when close-ups or low angles are needed. Moments like this happened frequently enough that I couldn’t help but be annoyed, especially as you have to manually claim the completed reward within the menu as well. It may seem silly to be put off by a few steps that take only a few seconds but it’s a series of requirements that pull me away from the fun of the game.

"Hunting objectives is fun but tracking and cashing them in is clunky."

Another layer of friction comes from the fact you have to find some of the objectives out in the world, represented as envelopes floating in the environment. Sometimes they’re just hidden under a boardwalk but other times they’re high up in a tree or on a building which is a pain to get to given the floaty mess that makes up platforming in this game.

Objectives sometimes involve using items that you can find in the world that then get added to easy-to-access vending machines. However, using the items can be a little rough as the goofy physics, animations, and general dog behavior can make it hard to successfully throw a ball or stick, though this complaint doesn’t apply to every item (the violin works just fine and the dogs are very moved by it).

Completing these objectives gives you golden bones, called Bonks, that serve as in-game currency that you can use to buy camera parts from different lenses to new film packs. This layer of progression is among the most exciting as they help keep your photos feeling fresh. Bonks can also be found hidden throughout the world.

Despite the gig nature of it all, creativity has its place. You can post your photos onto dogNET and gain followers based on what a certain audience is looking for: from those who love classic portraits to folks who just want to see a dog in an outfit that you yourself can handpick when interacting with the dogs (in addition to petting them of course).

The way the camera functions is a bit at odds with itself. The premise is that you’re taking all these photos on a film camera so you have a limited amount of photos (though upgrades can increase this number). Besides posting your photos to dogNET to gain followers you can also save them to your favorites which adds them to a photo album you can view from your house. Other than that, you can make space on your camera roll by deleting photos which is referred to as recycling in the game. This struck me as odd since it went against the film idea but I was happy about the decision because convenience is more important to me than realism here.

Pupperazzi’s willingness to make this tradeoff between convenience and realism makes other decision choices confusing. For example, the only way to make changes to your camera is from the menu. This is where you select lenses, film type (which functions like modern-day filters), and additional settings like selfie and flashbulb. The inability to toggle between film is frustrating because it means mixing up my photos requires me to spend a lot more time in the menu. Granted the film shuffle setting helps alleviate some of this but it’s random and changes with each snap (which again, is limited based on camera space).

"Camera functionality is awkwardly stuck between convenince and realism."

Obviously changing film in real life isn’t as easy as swiping filters on an iPhone but you can’t delete pictures off a film camera either so it feels like there isn’t any unified reasoning behind how the camera functions. Neither reality nor convenience is chosen and I feel stuck in between and frustrated by the final result.

My favorite aspect of Pupperazzi is definitely the cuteness and creativity you see at play. It’s clear these dogs and their environment are lovingly crafted to delight players. And even in my own boredom and frustration I couldn’t help but smile when a dog zoomed by in a minecart, rolled by me on a bicycle, and did some sick tricks at the skatepark. Moments like those were truly memorable and for some players those simple joys may be enough to carry them through but for me the adventure simply fell flat.

Despite not loving my time with Pupperazi I was surprised by how many photos I loved when I looked back at my album of saved shots. The purchasable extras really went a long way and even helped offset some early frustrations I had. Tools like the slow-motion lens helped me turn chaos into cuteness as dogs quickly bounced around the beach and there was something so compelling and nostalgic about pixelated photos of dogs on swingset.

Pupperazzi had more mechanical depth than I was expecting and it’s undoubtedly adorable but it just doesn’t feel good to play and some design choices feel like snags that slow down the photographic fun.