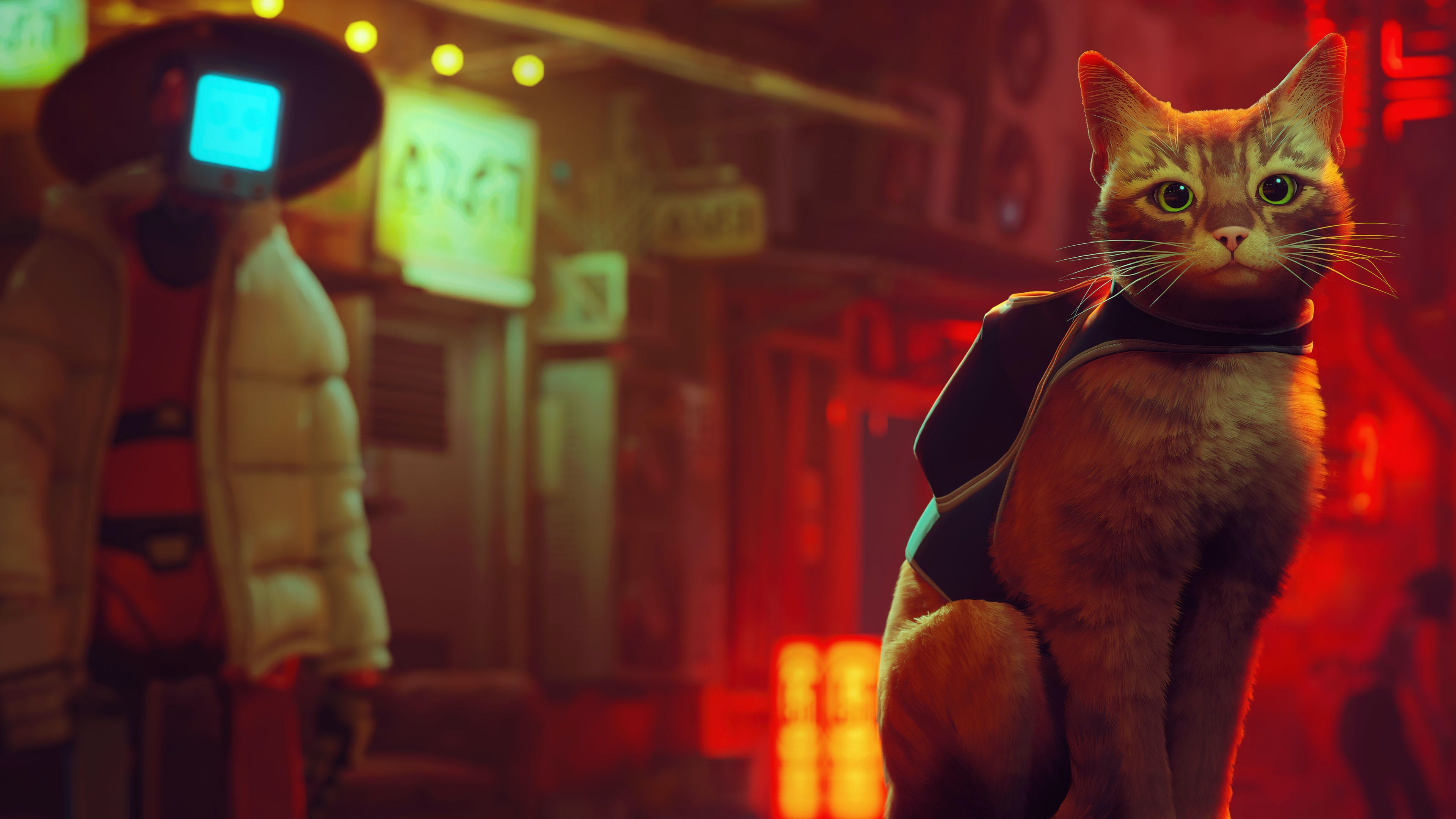 Stray is the ultimate cat simulation with a delightful adventure wrapping.

A third-person cat adventure game in a cybercity, Stray excels at capturing what it’s like to be a cat (granted, one that’s much more brave and capable than mine). The story, puzzles, and general challenges aren’t groundbreaking but they work because they give you intriguing ways to engage with the cat simulation of it all. Scratching rugs and meowing nonstop is fun on its own but Stray’s construction makes those mechanics more meaningful through its puzzles, objectives, and antagonists. The sum of its parts is something special in its novelty and delightful charm.

The second Stray begins you’re invited to play fight with your cat family, roll around, and find comfort snuggling up alongside them on a piece of cardboard. It’s a lovely introduction to the cat adventure to come.

This opening set me up for how seamless this game is: no maps, no UI outside of text boxes and your inventory, and no objectives list to consult. And the beginning of Stray, before you’re separated from your cat family, is a subtle tutorial in traversal and play. Just follow your fellow cats’ lead. All of this helps create a more immersive experience.

Despite jumping playing a huge role in Stray, this is not a platformer. Jumping doesn’t require any timing or distance gauging on your part. Instead, when you’re close enough to an object you can jump to a button prompt will appear (X on PlayStation). Leaping across areas is a simple tap away: the movement is as precise and magnetic as my own cat’s leaps from the floor to the window sill and back again. And this movement feels fantastic.

"Minimal UI makes for a seamless and immersive cat experience."

The jumps are snappy, the walk has a light bounce to it, and the run is a heavy gallop. Environmentally, the world is filled with objects that react to your movements — plastic chairs to toss around, bottles to break, paint cans to push off ledges — or give you more to climb. The result just compounds the incentive to explore. And this leans into Stray’s biggest design strength.

They say curiosity killed the cat but in Stray nothing could be further from the truth. The more you dig into the world, the more you’re rewarded whether it’s uncovering the lost memories of your new drone friend B-12 or finding trinkets to trade for key items.

This is also what makes Stray a pretty straightforward experience which may leave some wanting more challenge in its puzzle-solving elements or combat encounters. It was common for me to reach an objective that required a specific item and find that I already had that item just from messing around in the world.

In that sense, I wasn’t always puzzle-solving as much as I was experimenting in the world, seeing where it led, and reaping the benefits. Still, I thought that structure worked just as well and spoke to the natural curiosity and mischievous tendencies of cats.

"Puzzles are more about creating incentive and structure for exploration than posing a mental challenge for players."

To Be a Cat

Observing a cat in real life is a treat but the video game medium gives us the chance for something more. What’s so cool about Stray is you get to be both the active participant (controlling the cat) and the observer (as the player watching the story unfold).

I found myself joyously leaping across rooftops with ease or squeezing through small passageways with skill. Exploring the neighborhood is a soothing experience where play is encouraged and personality is around every corner.

This is contrasted with the regions between residential zones where you’re cutting across dangerous territories, avoiding the Zurks — creatures that consume everything — or stealthily creeping passed armed security. I was pleasantly surprised to see Stray take on a more intense tone in these areas, albeit while stressed over my furry friend’s safety.

The slice-of-life aspects are among the most entertaining as I scratched up furniture, leaped into boxes, and fiddled with the human remnants that filled this robot city: flipping through TV channels, messing with vinyl, and knocking books off shelves.

"Stray’s attention to detail warms my heart as a cat lover."

Stray’s attention to detail warms my heart as a cat lover: from the way the unnamed protagonist cat flops onto the floor when B-12 joins them to the fact that you can see their belly move ever so slightly as they breathe. All of this and more reminds me of my own cat, Bruce, who was entranced by my playthrough and whose ears perked up as meows came through the speaker of my DualSense.

Your presence doesn’t go unnoticed in Stray. On top of talking to citizens with the help of B-12, you can cuddle up against legs, sleep on chests, and even trip robots as they walk by.

Kitty in the Cybercity

Despite being a linear story, there’s plenty to take in given how dense and detailed the different areas of the city are. The vertical design of neighborhoods combined with the different routes you can take to get around made regions feel vast despite consisting of just a handful of apartments, businesses, or landmarks.

The first residential space you encounter is a bustling region with neon lights, rooftop rugs, friends working on projects together, a robot grandma knitting garments in need of more material, a musician in search of sheet music, vending machines dispensing energy drinks you can trade for items, and so much more. There are evocative lighting choices throughout and small details help create a story: like the fact that all the calendars are turned to October 11th.

These neighborhoods are connected by dangerous tunnels or passageways, adding another layer to gameplay: combat and stealth. Combat comes in the form of using a device your drone buddy eventually gets. It's essentially a light beam that can destroy the flesh and metal-eating Zurks but it can overheat if used too often. It makes for a fun push and pull that’s a bit more engaging than just avoiding enemy swarms, as was the case in the opening hours.

"There's stealth but, thankfully, it's not instant fail."

You can sneak by the Zurk nests but proper stealth comes later in Stray as you avoid sentinels by running passed, standing in strategic spots, and — of course — hiding in boxes. Best of all these stealth sections allow you to escape even if you’ve been spotted by outrunning your foes’ spotlight or making it to a hiding spot in time. No instant fail stealth sections here!

Sounds of the City

Again, what Stray does so well is create an inviting and intriguing set of environments to exist in and explore as a cat. And part of what brings those environments to life is the brilliant sound design.

Upon first arriving in the city there’s an eerie static mixed with muffled voices oozing from the TV monitors that are pointing you in the right direction: the stairs off to the side. When you make your way up those stairs, through the beaded curtain, the neon noodle sign emits a deep blare. And after all that dissonance you’re left with nothing but the light pitter patter of paws before the next neon sign blares ahead, guiding your eyes and ears forward to continue the journey.

There are countless examples of moments like this on top of constant smart choices that add just enough dramatic flair to remind you that this is a cat’s story. Things like the creak and slam of a wooden panel dropping to form a bridge for you and the differences in sound as you walk across different surfaces. The sound design team wasn’t afraid to layer, get detailed, and play with dissonance in compelling ways.

Narratively, the setup is a classic get-out scenario. A few rebels longing for freedom with faith that something better is beyond the walls. While the plot isn’t revolutionary I really enjoyed the writing, particularly the way it explored some dark themes while having humor along the way.

At one point B-12 is reflecting on the fall of humanity and asks “what do you think it feels like to be dead?” On the opposite end of the spectrum, after interrupting a game of dominos and speaking to the robot playing they remark that they’re programmed to win this game and ask us not to tell anybody. These small moments with B-12 and NPCs add a bit of humanity to this humanless world.

"The writing is a delightful mix of quirky and serious."

While Stray never fully unpacks the issues it raises when it comes to capitalism, environmentalism, policing citizens, and more, I appreciate the way these motifs were weaved within the larger story. It felt appropriate given the fact that our cat character was just dropped into the world. And it invites you to think about humanity as these robots tend to mimic what came before. All of this is supported by the environmental design with abandoned pianos, old love lock bridges, and restaurants to create this futuristic ghost town of humanity.

It took me about 6.5 hours to finish Stray which included some tasks outside of the critical path. The estimated runtime, according to the team, is 8 hours for most players and 10 hours for completionists. Overall, the pacing felt good and there were enough regions across the chapters to keep me entertained throughout the journey.

Stray moved me as a cat lover who relishes the opportunity to explore and tinker within detailed environments. It’s a straightforward experience with pretty simple puzzles but the act of completing them is its own satisfaction because the process of leaping across buildings and interacting with everything you can is a joy in itself. Stray is the ultimate cat simulation with a delightful adventure wrapping.