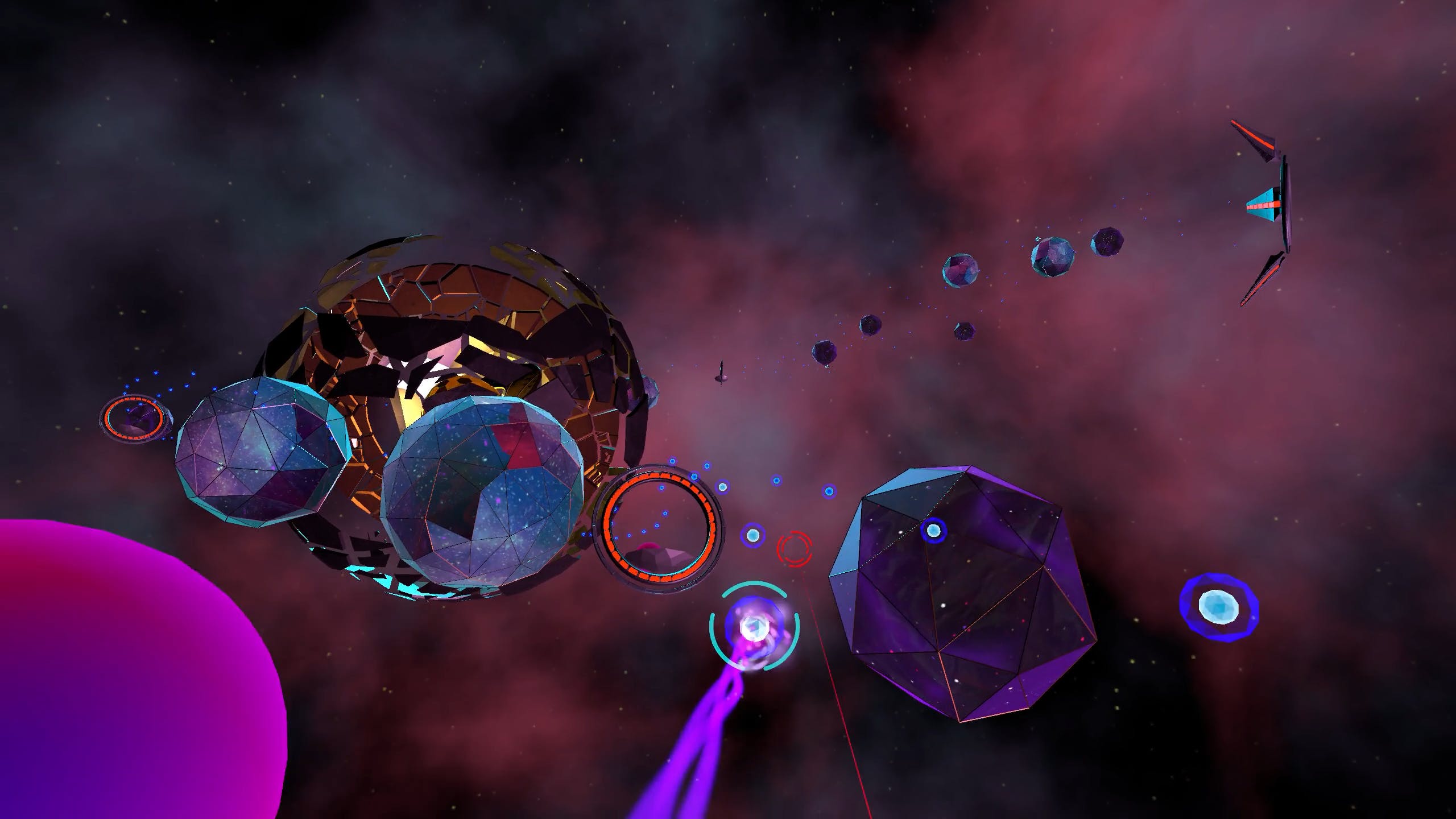 Leaping across the cosmos may be comfortable in Straylight but its take on first-person VR platforming happens in a void, devoid of intrigue.

Straylight is a platformer but not in the way you might expect. You’re not really jumping; instead, you’re using a tether, whip-like device to swing across blue star dots. You dual-wield two guns that each have the capacity to latch onto these dots. Moving forward is a matter of whipping your hand to create quick momentum or swirling your wrist to slowly reel yourself toward the point of contact.

Each level is about reaching the end with ring checkpoints along the way. The tetherable dots form paths that guide you to the next ring and, subsequently, the end of the level. For the most part, you’ll want to follow them though there’s a bit of room for alternate paths. There are enough dots where you can pick and choose which you skip and which you latch onto. If you’re skilled enough you could fly across entire sections of the levels.

The first thing that struck me about Straylight is its ability to capture the feeling of both flight and free fall. Unfortunately, that feeling is limited to moving at decently fast speeds and those speeds cost you a significant amount of control.

One of the best elements of VR is the possibility for immersion and one way VR creates immersion is through rhythm and fluidity in movement. While moving from dot to dot feels natural in Straylight, I’d continuously default to stiff and safe actions because that was always my best shot at getting to the next checkpoint.

I wanted to lose myself to the tethered pulls, swings, and twists of floating through space. I wanted to move at speeds that thrilled me. Instead, I was always determined to finish my task but never delighted to do it.

"I was always determined to finish my task but never delighted to do it."

Additionally, the gap between failing and trying again is a bit too long. You’ll fall for a significant amount of time before being booted back to the last checkpoint. One reason for this is because you can recover even after dropping from huge heights, provided you’re able to tether onto another dot and pull yourself back up. But I still found myself well out of range just waiting for my run to start again. This a minor gripe but can become a major issue for players who fail often as this long load time can exacerbate existing frustrations.

While Straylight is meant to be a graceful experience with some challenging traversal this idea isn’t supported by the level design or the amount of control you have when it comes to propulsion. As a result, most of the journey to the end of any given level was a series of tentative swings.

Straylight’s more difficult levels managed to bring a bit more enjoyment when obstacles were present enough to force me to move faster but sparse enough to give me room to be a little sloppy.

But anything that required too much precision quickly became an exercise in frustration, forcing me to be fast but not too fast.

As a result, Straylight just isn’t that fun and its best qualities are undermined by dull level design and even duller visuals.

In VR, a novel experience can be worth wading through subpar gameplay but Straylight’s setting may be one of its weakest elements. Space is empty, the planets are basic spheres, and the deadly obstacles look almost identical to neighboring planets.

"Straylight’s setting may be one of its weakest elements."

There’s a lot of nothingness with a few geometric objects floating around with a bit of sheen and neon coating. It feels uninspired. And narratively it feels similarly contrived with a robotic voice over saying ominous things, such as pointing out that you’re not dying enough.

Straylight’s physics are solid but as it stands nothing is compelling me to see this game through.

STRAYLIGHT will launch on Oculus Quest and Quest 2, PlayStation VR, Valve Index, HTC Vive, and Oculus Rift in Q3 2021 for $19.99, and is available now in Steam Early Access and via free demo. For more information on the game, beam up to the Dr Bloc website, or find the team on Twitter, Facebook, Instagram, and YouTube.