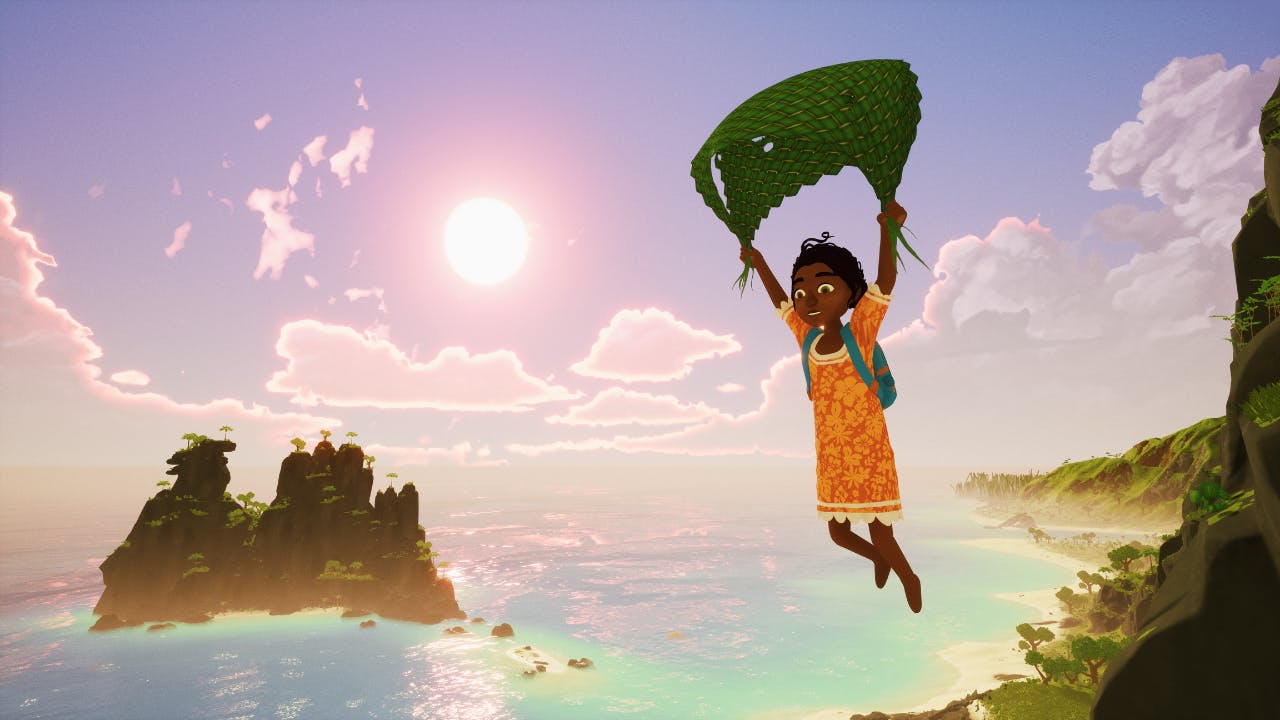 When Tchia was first revealed folks were quick to label it as “indie Breath of the Wild” due to its open-world design, glider, and the way its main character holds items above her head (as if she’s about to throw a pot). Of course, those weren’t the only standout features from that first trailer. Inspired by New Caledonian cultures, Tchia is a cute adventure platformer centered on climbing, gliding, swimming, sailing, and more. Most interestingly of all, the standout mechanic is soul jumping: a special gift that allows the main character (Tchia) to take control of over 30 animals and hundreds of objects. From getting around more efficiently to solving puzzles, soul jumping creates a suite of cool gameplay opportunities but practical implications aside it’s simply a joy to do.

The preview build I played is a few hours into the game, skipping past the introduction. There were only a few tasks available to me but I could explore a section of the island as much as I wanted. After a few hours with Tchia, I can’t wait to play the complete game. I found myself calm, happy, curious for more and compelled to become a completionist with this one.

While there was plenty of structure within this preview build through the quests and map checklist I like to start this kind of game by seeing what I can do in the world and exploring in ways that come naturally to me. Fortunately in Tchia, that was smooth sailing.

I knew Tchia was special when I hit L1 to enter soul jump mode and saw I could possess the steak sitting on the grill. I did so immediately and was amused by the funky physics of being a piece of meat hurling myself across an island. It’s hilarious, a bit novel, and frankly, a fast way to get around. These soul jumps have a time limit but they still offer an immense amount of freedom and play.

You can toss yourself into the sky as a bucket, exit the item midair, return to soul jump mode which slows down time, enter a bird, and fly off into the sunset. Stringing these together is so cool and I loved the different movements each offered. I charged up mountains as a deer and derpily made my way downtown as a little lizard. Different animals and items allow you to do different things from pinching as a crab and digging up dirt as a dog to pooping as a bird and laying eggs as a chicken. My only disappointment on this front is some of these abilities are duplicated across different things (aka plenty of animals poop). But, in general, Tchia’s soul-jumping feature nails the sandbox experience.

The Way You Move

The second I got my hands on Tchia I was relieved to see that it controls pretty well. Basic movement and turns are smooth and responsive. Trees are simple to latch onto and if you’re looking to jump from tree top to tree top there’s a bit of a magneticness to account for the lack of precision in the platforming. The jump is a bit floaty with an added weight at the end to make it feel a bit more grounded.

Climbing works well and you’re able to walk up pretty steep surfaces before you start draining your stamina. You pass out if you run out of stamina but that wasn’t a problem for me during my time. Stamina may be inherently limiting but it never felt like it stopped me from exploring more or reaching certain areas. And those aforementioned soul jumps are simple to get the hang of.

While primarily an adventure game there is a bit of action in Tchia. The island was attacked by fabric creatures you must defeat by lighting on fire. These monsters have camps throughout the island you can discover, sneak up on, and destroy with strategic soul jumps. Unfortunately the process of attacking felt cumbersome. It was definitely the weakest part of my time with Tchia and cause for concern if combat ends up playing a more integral role in the game.

Overall, I’m satisfied with how Tchia controls but it’s the aspect I’m most critical of. It’s not bad by any means but it could use a bit of tightening and refinement. I still had a blast with the build and it won’t deter me from playing but you can really see how the looser controls negatively impact things like combat. Plus when this combines with performance hitches and general glitches it runs the risk of marring the experience. I personally don’t expect the general game feel to change much between now and release but hopefully, performance issues are ironed out.

To say love and care goes into game development is to point out the obvious but in Tchia I really feel it through the breadth of their ideas and the depth of the details.

The uke you can play at the campfire goes beyond a selection of notes on a wheel to include an up and down strum, a way to toggle between major and minor chords, and even the option to bend notes as you play. Outside of playing for fun you can unlock Soul Melodies to have an impact on the world, in this session I was able to change the time of day and sprout bouncy plants with just a quick tune.

They went all out on the camera too with options like toggling a flash, adjusting the focal distance, selecting different films to create a different look in lieu of just toggling a filter, and needing to actually take your film somewhere to process your photos.

Sailing could’ve simply been moving the boat with the joystick but instead, you raise and lower the mast to increase or decrease the speed and step back to grab the helm to steer in a specific direction. Everything in Tchia feels well thought out and intentional.

Cosmetics are handed to you throughout the critical path but there are plenty to find in the wild too. Outfits, hairstyles, accessories, glider materials, all of this and more are there for you to play with. The combos you can create add to the childlike wonder of Tchia as I dressed her in a grass skirt paired with cowboy boots the way only a little kid is bold enough to wear.

Even when gameplay features aren’t elaborately explored they do little things to bring you in like having you cook during a cutscene by rolling ingredients to place into oil or letting you do tricks when you jump from high spots or dive into the water. It’s these small moments of extra interactivity that engage and delight.

Tchia has the usual checklist collectahon activities such as finding pearls underwater, discovering vistas, destroying encampments of baddies, etc but it also is packed with cool side activities and minigames like a slingshot shooting range and a spot to carve totems to eventually unlock more soul meter slots to allow you to take control of animals and objects for longer. In this way, it feels like the developers continually looked around the world they built, thought “how can we make this more fun?”, and then added it

The result is a world I am eager to do everything in and I don’t say that lightly. The little touches are what make Tchia sing. And in a game with music and community as focal points, that’s incredibly fitting.