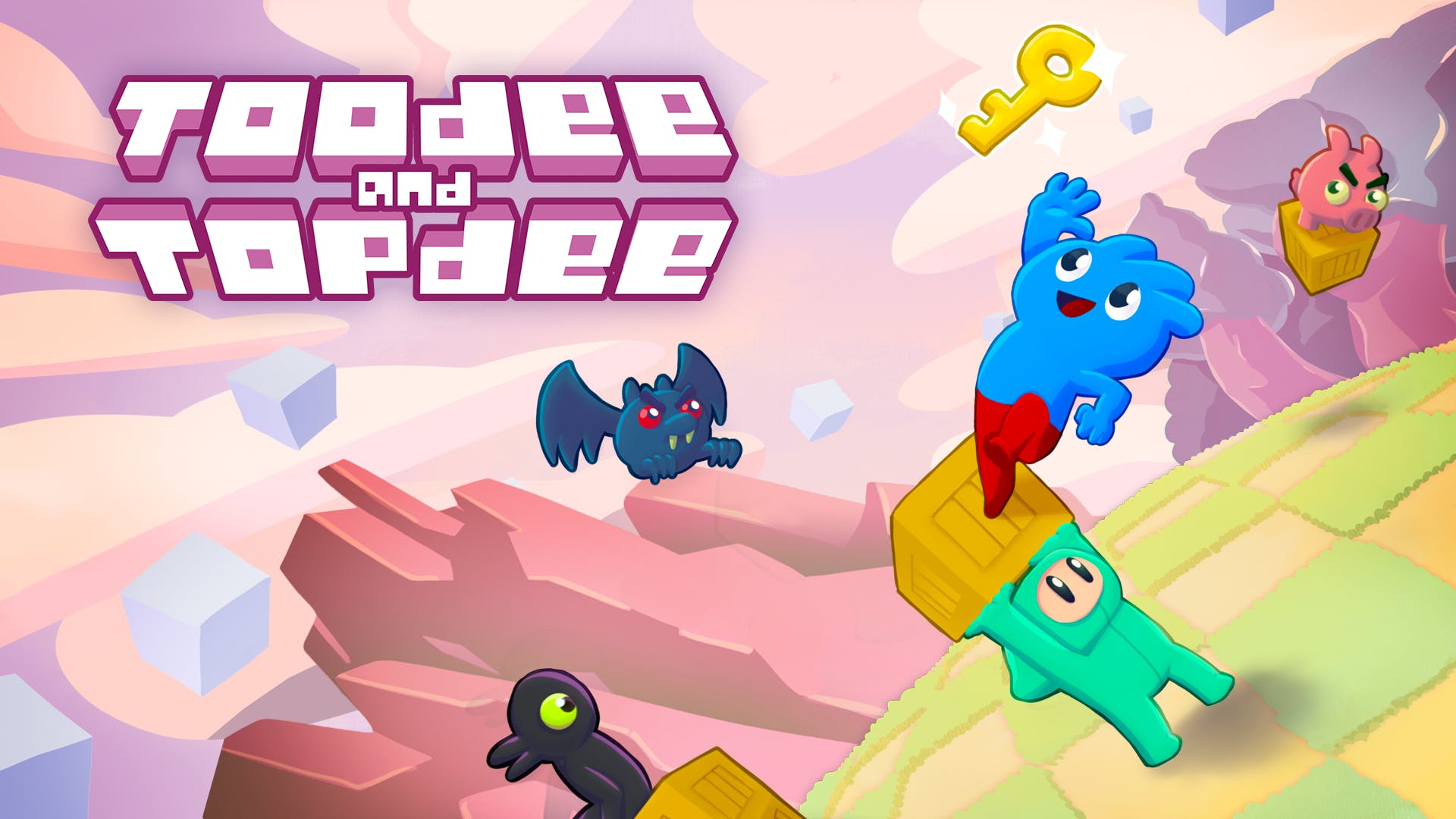 In life, you can often solve a lot of problems by looking at them from a new angle. In Toodee and Topdee this isn’t just encouraged, it’s required by design. Trading constraints and toolsets by alternating between a 2D side-scroller and a top-down perspective, Toodee and Topdee is a novel puzzle-platformer that isn’t afraid to offer up some real challenge though that becomes a bit of a folly when it comes to boss battles and other enemy encounters.

In Toodee and Topdee, you play as the titular heroes working together to save the universe after their dimensions merge in a moment of complete and utter cosmic chaos. Which is to say, the story is really just a means to justify the gameplay. While not a deal breaker by any means, the story was paper thin, a bit too self-referential, and the dialogue was occasionally trying too hard to amuse. Fortunately, the gameplay was more than enough to demand my attention.

Toodee exists in a 2D plane, able to walk left/right and jump, only to be brought back down to to gravity — essentially, controlling like a classic platformer character. Topdee moves through the world from a top-down perspective. This means they can move freely in all 4 directions (up/down/left/right) and can move block objects by pushing them or picking them up.

Having played with a controller it’s worth noting that precision with Topdee is a little finicky in that a move of the joystick or press of the d-pad didn’t always result in a perfect one unit move for me. The drawback here is I had to take a few extra moments whenever I was looking to move or place a block in a very specific spot. This was never enough to detract from my enjoyment as it’s pretty subtle but it was a slight inconvenience.

Each level has a simple goal of getting both characters to the end, represented by a portal that takes them to the next stage. But this straightforward goal is complicated by the different obstacles each character must get through to reach the end. And these challenges are further complicated by the ways in which Toodee may need to help Topdee and vice versa.

All of this adds up to an engaging way to take on each area because you’re immediately forced to assess the environment on two levels. Beginning a stage is a matter of thinking about everything at once, planning ahead, trying things out, and adjusting those plans as needed.

"I was often impressed by the clever design."

There are plenty of times you have to switch characters mid action, freezing the other character in the position they were left in, to intercept or reconfigure items. So while Toodee and Topdee is about playing with perspective it’s also about playing with time in interesting ways.

Like any good puzzle game you’re constantly being taught the language of the level design, which slowly introduces new concepts across worlds and even across levels. But the game isn’t afraid to throw in some red herrings so just when you think you can easily spot the solution, the rug is pulled out from under you.

The levels themselves are pretty short, able to be completed within a few seconds or minute provided you know the solution. I definitely had my share of puzzles that I stared at for a good while before uncovering the answer. By the second half of the game I found myself getting stumped every few levels which slowed my overall progress in a way that occasionally discouraged me but never felt unfair or unfounded. I never looked at a solution and scoffed at what was expected of me. Instead, I often found myself impressed by the clever design.

Dying quickly restarts the level but otherwise you can opt to restart by going into the pause menu and selecting the option. While the load times are brief enough to keep things going I will say I found myself wishing the restart was mapped to holding a button/key or that I could undo or reverse my last few actions because sometimes just one small mistake of a misplaced block can force you to restart the whole level.

I played the vast majority of Toodee and Topdee by myself, but I also took some time to dig into the co-op experience. While it was enjoyable to talk through a given puzzle with my partner, actually carrying out our plan was cumbersome.

The co-op is carried out well in terms of thoughtful options (specifically deciding whether anyone can change the perspective or only the currently active player) but I don’t think this is a game that benefits from co-op because so much of what you do is juggling a mental model of the situation at hand.

"Co-op mode feels like running a three-legged race and it’s too its detriment."

Playing Toodee and Topdee in co-op mode feels a bit like running a three-legged race; the bigger challenge is actually in the communication and ultimate execution, not the puzzles themselves.

Putting Up a Fight

Toodee and Topdee is at its weakest when it forces the player to rely on speed. By far, my least favorite levels were the ones that forced you to engage with too many persistent enemies at once, forcing you to make decisions on the fly, in a game that otherwise urges the player to be meticulous.

At these moments, Toodee and Topdee felt at odds with itself.

"Boss battles were more about managing spinning plates than engaging in combat."

This issue was at its worst during boss battles. I liked how it incorporated some of the core level design and puzzle solving from the world into the fight but with a default one hit and you’re dead kind of health bar, bosses felt more frustrating than exciting to defeat.

The real challenge didn’t come from the battle itself but from the amount of spinning plates to manage between avoiding spikes, enemy projectiles, and making sure you don’t switch to the other character at a time where they’re vulnerable.

Luckily, Toodee and Topdee offers a slew of game options that allow you to modify the difficulty to your liking. This includes things like adjusting the game speed and adding more jumps, to even the option to increase your health up to 5 hits (or just going straight for the infinite health buff).

These options can be a godsend, but using them to get through some design issues doesn’t absolve them, just makes them avoidable. The degree to which you need to multitask quickly just doesn’t lend itself well to this game which is more about offering mental challenges than ones based on reflex and dexterity.

Toodee and Topdee offers a refreshing take on the puzzle platformer genre that delights in its clever level design. Unfortunately, it’s held back a bit by its weak story and overly complex enemy encounters.