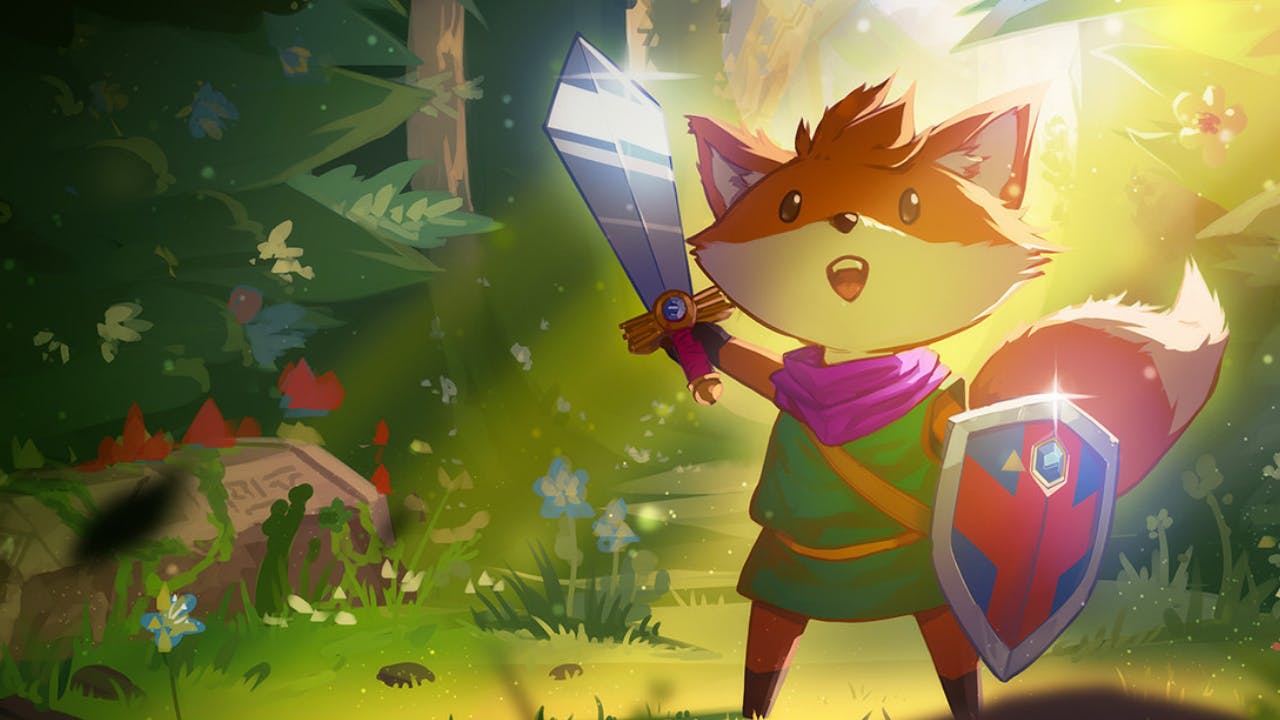 Despite all the familiar trappings, Tunic has something new to say.

There has always been a boatload of charm to Tunic. Seeing this adorable fox scamper around a cute world and swing their sword through a field of grass is enough to catch my eye but I went into this game eager to see below the surface. And while Tunic’s opening hours feel like a serviceable version of what has come before, it blossoms into so much more. Despite all the familiar trapping, this game has something new to say.

Upon waking up on the beach, the first thing I was struck by is how cute this fox is. This is to be expected; the art style of Tunic was a big part of what made it one of the most anticipated indies of the year. Even so, it had been a while since I stared at trailers or screenshots. Finally seeing this all come to fruition was a lovely sight.

Adorable hero aside, this isometric world feels cozy in its soft look, strategic blurs when peering through telescopes, and bold geometric detailing in the environments. Plus the animations are to die for from the stressed droplets of sweat popping out of the fox’s exhausted head when stamina runs low to the way larger shrubs scatter and vanish with a swing of the sword. When details are lacking those stylistic choices become striking in their own way, like the minimal animations in the water being offset by the color choice of a deep, over-saturated blue.

Enemy design starts off run of the mill but becomes more playful over time with birds that run away from you at full speed to funky, origami-shaped critters shooting icicles your way. Areas feel distinct and are densely packed with secrets without feeling overwhelmingly massive to traverse. Tunic’s world design embraces verticality and plays with perspective in a way that’s traditional without feeling completely cliche.

While Tunic is quick to impress with its aesthetic it took time for its mechanics to wow me. Unfortunately, my opening hours with Tunic felt only adequate. Oldschool Zelda games are a  clear inspiration, but this source material has been used many times over. Zelda DNA can be found in other recent hits, with Chicory and Death’s Door being just two that come to mind (both of which were in my top 10 for 2021). I try to stray away from comparisons as much as possible but given Tunic’s 2022 release the conversation surrounding this game will undoubtedly evoke comparisons.

Of course, it’s important to keep in mind that you don’t necessarily have to do anything new to be a good game, but even putting novelty aside there’s the question of whether Tunic does anything exceptionally and whether it has formed an identity/personality that can demand attention from players. I’m happy to say that it does. Tunic is absolutely a game worth paying attention to. But it takes a while to reveal itself as something special.

"Tunic is absolutely a game worth paying attention to. But it takes a while to reveal itself as something special."

Fighting Through the Combat…

Tunic’s shine is dulled by its combat, this negative stands out the most in the opening hours when you’re at your weakest but I also felt the pain of a few key combat choices during boss fights (which, luckily, are few and far between).

It’s worth noting that combat takes a back seat to exploration which is convenient because I could not get this fox into fighting form, even with the 14 hours it took me to hit the credits. And while I’m willing to consider the possibility that I just didn’t “git gud” enough, I’d like to focus on the ways combat didn’t land for me.

Combat felt cumbersome because the tools I was given were constantly limited by depleted or depleting meters. Fighting like this usually means a lot of dodging. Tunic has a dodge roll and invincibility frames to take advantage of, but it’s held back by a constantly depleting stamina bar. This mechanic isn’t unique given the souls-y design Tunic evokes with its combat and the way you lose (some) currency when you die that can be recovered by interacting with the ghost form you leave behind. But it feels abrasive here.

Stamina stress is exacerbated by the fact that you take more damage if your stamina meter is empty. And while stamina does regenerate automatically it means I was constantly draining and hoping for refills. Babysitting the stamina meter seems to be an intentional challenge placed on the player but it’s one that slows down the gameplay even when enemies are quickly coming for you.

I also struggled to keep up with bigger challenges because the menu you need to open to slot items (aka swap one bomb for another etc) does not pause or slowdown the game at all. During frantic boss battles this becomes an annoyance. In the moment-to-moment gameplay though, most enemies are easy enough to take down with 1-3 hits and you’re usually only taking on a few at a time, so my issues with combat don’t become a real nuisance until I’m in a boss fight.

To Tunic’s credit though, the more abilities you gain, the more fun the combat becomes. While these abilities do require you to use mana, which does not generate automatically, they’re still a welcomed and refreshing addition to battles especially because they give you a ranged option for attacking.

Health and mana are refilled at every game-saving statue and so are your potions. Plus there are other consumable items that can refill both of these meters so I rarely felt like I was stuck in a rough combat sequence during the adventure portions of the gameplay.

While most of Tunic’s combat doesn’t push back too severely, the difficulty spikes were massive and, for me, ultimately unenjoyable. Fortunately, there’s always the option to lean more heavily into bombs which Tunic actively encourages you to use. The middling combat made me more inclined to spam attacks than learn how to master the slow flow of fighting.

… Or Adjusting the Settings

Despite all this, I’m sure there will be those who can turn this cute critter into an absolute badass but I wasn’t one of them. Fortunately, there are some nice gameplay options in the accessibility tab including No fail mode and no stamina restrictions. You can toggle these settings on and off at will so if the combat isn’t your taste you can (almost) remove that barrier entirely. You’d still want to kill the enemies so they aren’t interrupting your exploration but the risk of failure would be gone. I would’ve preferred more nuanced or dynamic ways to shift the difficulty but something is better than nothing.

Notes in the Margins

The wonderfully executed exploration and world-building is Tunic’s secret sauce. This game is all about finding pages of its own instruction manual. It’s a meta move and a nostalgia play but it absolutely works. It’s cute but also incredibly functional and creates a uniquely helpful gameplay loop.

At their core, instruction manual pages give the player information on Tunic but that info comes directly and indirectly. There are times when you’re taught something like a certain button input to do at a specific place to uncover a secret. Other times you have to connect the dots yourself and the manual just points you in the right direction. For instance, I was told where to use a certain item but it was up to me to figure out what the result meant for me gameplay-wise.

"Exploration was a reward that kept giving."

The instruction manual does a fantastic job breadcrumbing the player along from what to do next to a new strategy for fighting or exploration. Even more charming and smart are the notes scribbled in the margins of the booklet, some of which have obvious meanings and others feel like puzzles unto themselves.

What’s so brilliant about the instruction manual is it incentivized exploration and created a constant anticipation loop. I was driven to find that next page and use that info to go somewhere else or approach a task in a new way. And my reward was more exploration, which is the best part of Tunic. This loop drove me through the whole game and made it a delightful and rewarding experience.

Tunic’s secrets go deep and I left plenty of stones unturned. After rolling credits, I dipped into the developer-provided Discord server. It was designed as “an embargo-safe place for reviewers to share tips, secrets, and bounce ideas off each other while playing through” as the team feels that “community collaboration is key to playing Tunic.” And while there’s a lot of fun to be had in swapping secrets, solutions, and theories, I don’t think you need it to enjoy or get through Tunic.

In fact, one of my favorite aspects of this game is that there are a wealth of codes to crack, upgrades to equip, and chests to find but you don’t need to go full conspiracy theory board to enjoy or understand what’s happening.

"The instruction manual feels like a built-in friend and notetaking tool all at the same time."

Tunic caters to different levels of player curiosity and investment. There will surely be players who swear the true experience is nestled within New Game+ and a deeper understanding of varying dimensions but I think Tunic is a great play through even if you’re not looking to comb the internet or create unique group chats (but if you are looking to do that you’ll have your plate full!).

Tunic pulls this balance off because the instruction manual feels like a built-in friend and notetaking tool all at the same time. Best of all, you can do things that are in the manual before finding the page for it.

Everything in Its Right Place

There’s a natural flow to the world design that just feels so damn smart. I’m often put exactly where I needed to be. The few times I was lost I just needed to trust the process. The answer was almost always right in front of me and easier than I thought it was.

"There’s a natural flow to the world design that just feels so damn smart."

In the earlier hours of Tunic, I remember coming across a dark cave and knowing I’d have to return after getting a way to illuminate it. When I got what I needed I kept pushing forward to the end of the area which conveniently brought me directly to the entrance of that cave. I was impressed that the ladder to leave had been hiding in the shadows the entire time. Areas are just generally beautifully interwoven which takes some of the sting out of the clunky fast travel that eventually unlocks.

I felt like I was digging into the world of Tunic, not running back and forth, even when I was revisiting areas.

Tunic takes the “playground guide help discussions” cliche and turns it into a charming mechanic rife with mysteries that serve as its own story. The combat gets in its own way but it takes a back seat to something pretty special.