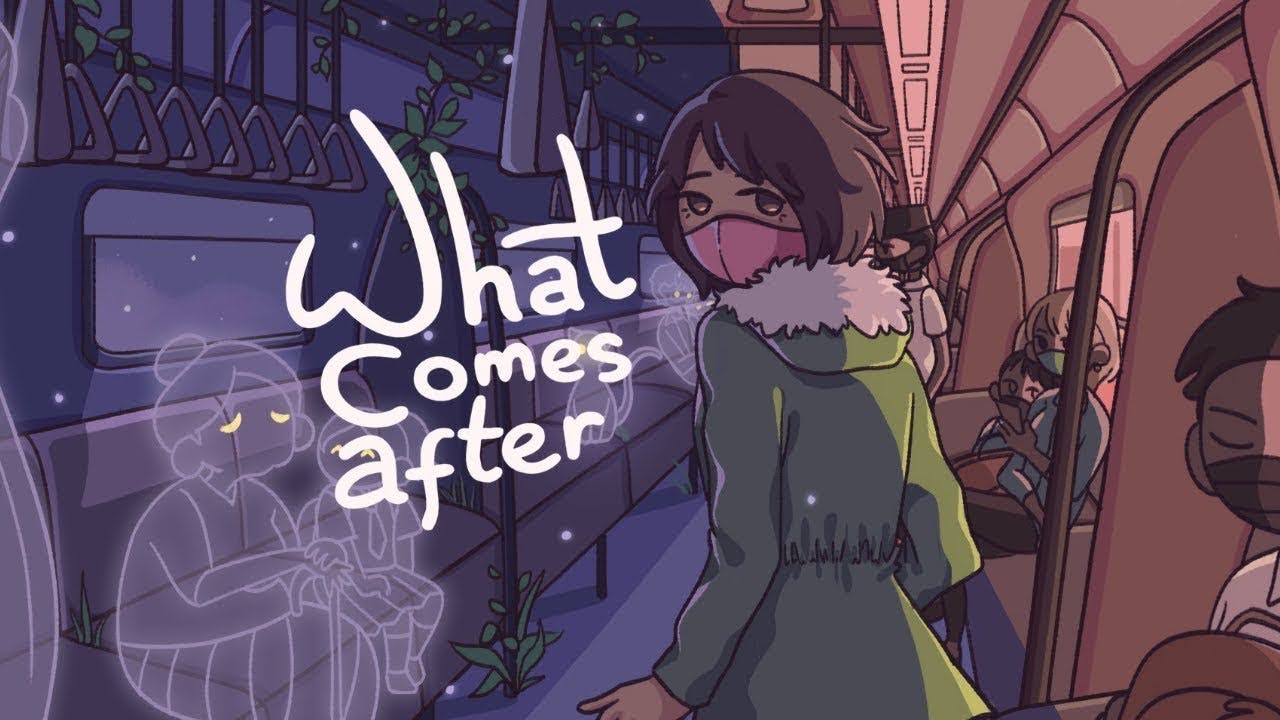 What Comes After contains small bursts of well-written stories but the act of playing through them is dull in comparison.

Death comes for us all and it operates on a timeline none of us are privy to. Processing what’s on the other side and how it changes your perception of what came before is at the core of What Comes After.

You play as Vivi, who wakes up on a train ride for the deceased in which she’s the only living passenger. Unable to turn back until the journey is complete she’s invited to walk across the train cars and chat with the dead in the hopes of leaving with more knowledge and a better outlook on life.

It took me about an hour to see everything the train had to offer. While I was moved by the climax of the story and charmed by conversations with the dead, What Comes After failed to fully pull me in due to its repetitive visuals and lack of direct player participation.

Like death, public transportation can become common ground across social lines. Folks from all walks of life will find themselves on the train. On any given day, you’ll be surrounded by business people, school children, peddlers, shoppers, tourists, and more. This made the train a great setting for What Comes After.

Narratively, this parallel is highlighted from the beginning with Vivi eavesdropping on snippets of conversations across the train cars only to replicate that gameplay as you approach different ghosts for brief conversations.

Taking the train, it’s common to see people fall asleep or have fallen asleep yourself so Vivi waking up frazzled and frantic felt like the perfect transition to this trip to the afterlife.

The End of the Line

It’s clear that What Comes After aims to be lighthearted, even while broaching heavy topics. It’s mostly successful, but at times it feels a bit too nonchalant. When Vivi thinks she’s dead she remarks “And I’ve been considering [dying] for a while anyway! You won the jackpot, Vivi! ” with a level of cavalierness akin to accepting a free upgrade to a large popcorn.

There’s a way to casually remark something this serious while still couching it in its severity. It’s a big ask for What Comes After to dig into those emotions more but it invites that challenge by making suicidal ideation one of the focal points of the game.

While suicidal ideation is a driving force in What Comes After, it takes a backseat to the passengers of the train who all have interesting and eye-opening stories to share about their (often untimely) demise.

I frequently found myself moved by their stories and, while reading them, I instantly began drawing parallels to my own life from candid reminders of the importance of family to harsh statements about spending your entire life making someone else rich.

"Things can shift from sad to funny while still feeling seamless."

Mostly I was impressed by how quickly What Comes After can shift from sad to funny while still feeling seamless from a man excited to finally see his wife again to a woman asking if there’s time to haunt her ex before the train reaches its destination. Death brings out an array of thoughts and emotions for everyone and What Comes After gives us quick glimpses of different mindsets and experiences.

Realism Behind the Magic

In terms of realism, it’s hard to imagine folks on this train to the afterlife would instantly open up and, in some ways, come to the aid of Vivi. Strangers on a train aren’t exactly the friendliest group. But Vivi is the main character after all and What Comes After adds enough curt responses to help ground how helpful everyone seems to be.

Early in What Comes After you speak to a child but their demeanour felt beyond their years to me. And nothing takes me out of an experience more than a child that’s written as if they were an adult.

"It’s hard to imagine folks on this train to the afterlife would instantly open up."

What Comes After later justifies all conversational abnormalities (such as animals being able to talk) to the fantastical nature of the situation which is acceptable but not quite satisfying.

Cuteness is clear from the jump from the delicate, translucent forms of human ghosts to the animals who have passed away, but still want to be held and pet. Surprisingly enough, even the plants are included on this death train.

There’s plenty of appeal in the awww factor of What Comes After but more importantly the inclusion of plants and animals serves as a reminder that all creatures experience death. And not all of them had a good life on paper.

Suffering Circus animals and hungry, stray pets are both reminders of the ways humans are participants in cruelty, even in passive ways.

Just Here for the Ride

My biggest complaint about What Comes After is it fails to make the player an active participant on any level. You talk to dozens of passengers during the game but there are no dialogue options. Instead, you’re just pressing A through the conversation as if it was a cutscene.

Not every narrative game needs to be choice driven and not every game needs to have layered mechanics but having neither made me feel like What Comes After is a game that happens with me there rather than something I’m playing. Lack of player involvement made me feel less connected with Vivi and, by extension, less interested in the story.

"It fails to make the player an active participant on any level."

Other ways to entice players are underutilized. There are just a few animations Vivi does as she reacts to people’s stories and cycling through that small handful gets old quickly. While you’re always on a train some cars have a different look to them to help break up the monotony but it’s not enough for me.

The story What Comes After is telling is a solid one but it feels stiff given the limited presentation and, almost non-existent, interaction. I can’t engage actively in conversation or through exploring the environment. Despite being in control I’m left on the outside looking in.

What Comes After is inoffensive but unremarkable while managing to have some pockets of genuinely strong and charming writing. Without getting into spoilers the climax of What Comes After was by far the highlight of it all. There’s a visual shift that creates an intimacy that had been missing from the rest of the experience and the scene is magical, memorable, and downright tear inducing. But of course, one bright spot isn’t enough to light up the room.

What Comes After contains small bursts of well-written stories but the act of playing through them is dull in comparison.