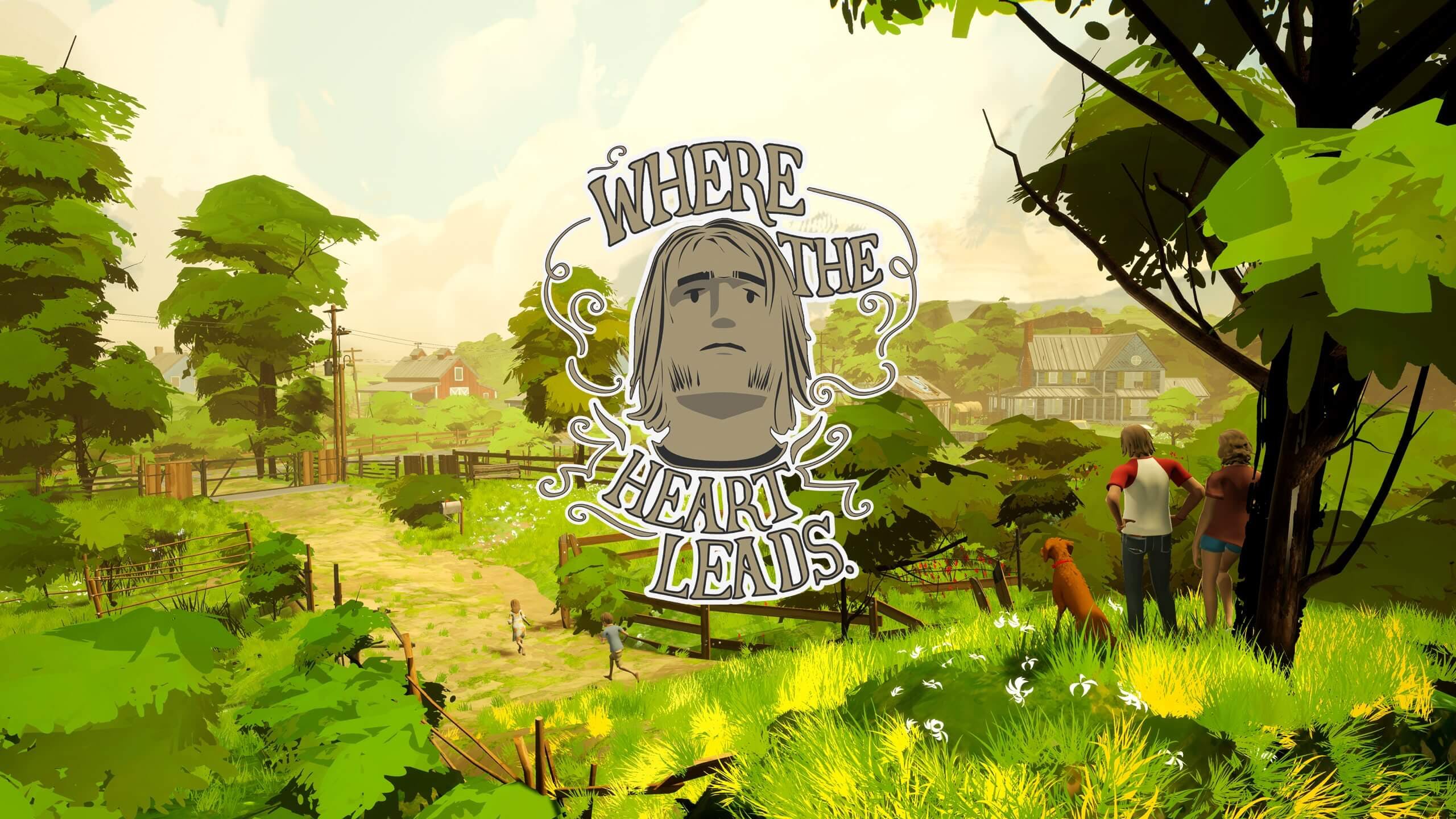 Where the Heart Leads has decent writing, some fun sim integrations, and a few interesting plotlines but these qualities are eclipsed by how slow paced and unfulfilling the majority of the adventure is.

The chance to replay out your past and actively shape your future is a dream to many. In Where the Heart Leads you get to do just that. After falling deep underground you’re transported to another realm and are suddenly a teenager again just trying to get through life as best you can.

Where the Heart Leads invites you into its world through magical realism but it fails to maintain any intrigue in the mysticism it does have. The quaint small town and decent dialogue aren’t enough to make up for the poor pacing, dull plot points, and underutilized mechanics that lead me to nowhere interesting enough to justify my 10 hour journey home.

No Magic in the Air

The early moments of this adventure game are underscored by decisions, light environmental puzzle solving, an unfortunate fall down a sinkhole, and an encounter with a ghostly figure of your brother back when both of you were kids. His initial invitation to help you feels like an invitation to the player to go on a journey that’s part phantom part fantasy. But the result is extremely mundane and Whit is all too quick to go with what’s happening with very few questions or self-reflection. All of this causes Where the Heart Leads to start off like a missed opportunity and that feeling permeated my playthrough even as more characters and plot lines were introduced.

World building aside, Where the Heart Leads is mechanically underwhelming. Yes, this is a story game but mechanics can still go a long way. But picking up collectible notes does little to move things along and interacting with objects rarely goes beyond holding down a button to pick up materials or construct an entire garage almost instantly out of thin air.

However, one of the most appealing aspects of Where the Heart Leads is when it does leverage the core gameplay of interacting with objects and making choices to carry out sim elements. For example, something as simple as being able to take clothes out of the dryer to change your outfit is a small touch that shakes things up while getting me momentarily more invested in Whit as not just a character but my character.

"I can point to areas of the environment and tell a story about how they got there and it’s a story I had a direct hand in."

Likewise, some choices shape how the environment looks from which businesses bloom and what kind of art decorates the city of Carthage to where you and your family live. These moments give me direct ownership of the town and my life. I can point to areas of the environment and tell a story about how they got there and it’s a story I had a direct hand in.

All of these culminate in me feeling invested in what I’m doing and delighted, or at least intrigued, by the results.

The small town and familial drama is extremely middling for the vast majority of the journey. Sure, arguments may ensue between characters but the stakes rarely feel high in the first two-thirds of the story. Part of the problem is a lack of groundwork for why I should care about the people in Whit’s life other than their relationship titles.

As Whit, I care about my in-game brother only by heavily projecting my own real life relationships onto him but there’s nothing in universe that cultivates our relationship as something meaningful, unique, or intimate.

Likewise, my love for Rene is told to me more than shown. I found myself falling into roles because they’re assigned to me by way of playing the game more so than feeling obligated to these supporting characters.

Where the Heart Leads’ music negatively permeated a huge portion of the experience with melodies akin to a meditation app. I wanted the score to evolve and fluctuate alongside the shifting environments and character dynamics but it was so overly soothing. When combined with the overwhelming walls of text divided across back-and-forths that never seemed to end I found myself quite literally falling asleep at times.

"The music was akin to a meditation app… in a bad way."

The sound design had the opposite problem: being so abrasive that it stood out as unnatural.

By nature of its genre, Where the Heart Leads lives and dies on its writing. And by the end it was hanging on for dear life.

While being “narratively larger than “The Lord of the Rings” trilogy by J.R.R. Tolkien, or “Infinite Jest” by David Foster Wallace, or “The Stand” by Stephen King” is impressive from an output perspective, too many interactions drag on to the point of being rendered powerless despite the quality of the writing.

"I’d become fatigued by the amount of critical path dialogue with little action to break it up."

There are numerous conversations that could be reduced to just a few lines telling the player what to do next that are instead lengthy back and forths. This lack of brevity made me less inclined to comb over found documents or strike up optional conversations because I’d become fatigued by the critical path dialogue.

As a lover of visual novels and adventure games I’m not shy about reading. The problem is Where the Heart Leads doesn’t have enough of an ebb and flow between performing actions (walking around town, working, etc) and reading mountains of text. And it often feels like more important conversations were just as delved into as trivial ones, making it harder to take note of more significant moments.

The action is also muddied by occasionally vague or inadvertently misleading directions. I was once told to go to a plot of land, but when I arrived there wasn’t a way to interact with anything. This left me wandering around and talking to people in the hopes of finding answers only to realize talking to my wife would prompt a series of events that would lead me to the plot of land I had already visited to begin with. For what it’s worth the areas are pretty small but they’re just big enough to be a bit of a pain if you end up running in circles.

It’s a shame because, with a few exceptions, the dialogue is good. From chatting up the local bartender and talking to real estate agents to bonding with loved ones. Where the Heart leads explores capitalism, art, and familial obligation in a way that feels authentic and candid. I found myself relating to sentiments, weighing my options, and was even moved by a number of lines.

One of the biggest compliments I can give to Where the Heart leads is that it often manages to avoid basic decision binaries. While you’re often given just a few options, 9 times out of 10 those choices aren’t objectively good or evil. Right and wrong often came down to a matter of perception rather than societal norms and common sense which made me more invested in the outcomes.

Ideas I thought would fail would work out and safe bets would fall through in a way that reflected the randomness of real life. We never know what will come but there is something compelling about watching it unfold.

Despite everything, the last third of Where the Heart Leads finally gets its footing. The increase in movement in terms of the narrative and environment finally keeps the intrigue alive. I didn’t have a chance to get bored because I was constantly being pulled into new situations with characters who finally became well rounded.

"Despite everything, Where the Heart Leads gets its footing in the final third."

Slogging through the story pays off in exciting ways as choices I made years ago finally yield enticing results. I was eager to see what happened to everyone and I found myself reflecting on whether my life turned out the way I wanted.

Unfortunately the bulk of Where the Heart Leads feels far more static despite some environmental changes, specifically your time as a teenager and at your first house.

Without giving anything away, the overarching plot is more confusing than intriguing in its approach to mystery and open ended circumstances which makes the ending a bit unsatisfying.

Where the Heart Leads has decent writing, some fun sim integrations, and a few interesting plotlines but these qualities are eclipsed by how slow paced and unfulfilling the majority of the adventure is.