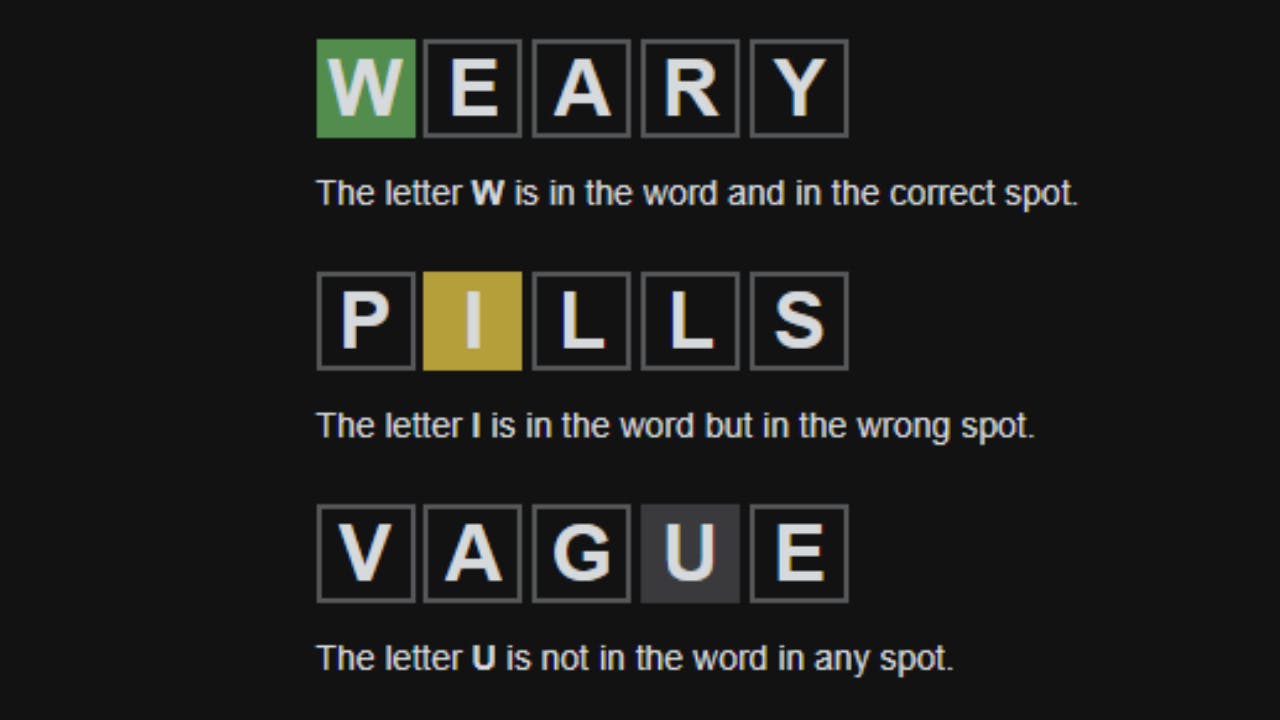 I found Wordle the way most people did: by being confused on Twitter. Scrolling on a lazy holiday afternoon I came across a Tweet with a mysterious stack of emoji squares with some text that, seemingly, provided context: Wordle 197 4/6. After checking the replies and doing a quick search I learned that Wordle was a word game, played in your browser.

I was greeted with the following directions (and some examples):

“Guess the WORDLE in 6 tries. Each guess must be a valid 5 letter word. Hit the enter button to submit. After each guess, the color of the tiles will change to show how close your guess was to the word.”

From there I went from the confused to the confuser, eagerly sharing my results on Twitter. I answered a few folks who asked me about it but most people went through the same search loop I did and it wasn’t long before the craze spread further.

I found Wordle from someone I follow and soon others who followed me became hooked too. Simultaneously, people I didn’t know at all found it through their own means. And before I knew it felt like every games media person I had and hadn’t meant was playing Wordle .

The magic of the sharing system is it says something without saying anything. If you haven’t played yet knowing whether someone had a hard or easy time, whether they succeeded or failed, rarely means much. If you have played that day you get a better sense of what someone may have found challenging and, on the competitive side, see how you fared compared to your peers.

Whether you play Wordle or not there’s a desire to make meaning of the boxes and that curiosity is how most of us found Wordle. Naturally, those who opt not to play may find the cryptic visual annoying but muting the phrase Wordle can fix most of those timelines.

A Routine I Can Do

What makes Wordle so compelling to me is it’s a routine that formed so naturally I didn’t even realize it was happening.

Countless articles, podcasts, self-help books, and vlogs have talked about the benefits of having a good routine. But as someone who has started The Power of Habit and failed to have the discipline to finish it, I find the whole process of building the life I want to be a Sisyphian task. I take it on month after month, year after year, and I struggle to see the progress.

Lately, I’ve been focussing more on asking myself what my “why” is when it comes to my goals. Do I want to make changes because I want them or because they’re perceived as improvements? Is knowing something is good for me enough to make it feel good to do? And to what degree do my habits need to feel good (immediately)?

I don’t have any grandiose answers to these questions so instead I’m trying to lean on self-acceptance, letting things take time, and acknowledging that there’s a season for everything.

So at a time where self-improvement and reflection is in the air, Wordle is the ultimate cross of comfort and betterment. It’s fun, it’s mentally stimulating, it (can be) social, and the daily aspect combined with the short playtime makes it easy to stick with.

Wordle didn’t start from a place of goal-setting; it started from curiosity and continues out of love. I never pursued it to have something to bond with my boyfriend over or to have something mentally stimulating to focus on before bed or first thing in the morning but when you’re genuinely into something good things come from it.

It’s a lesson I hope to take with me for the rest of 2022. Discipline has its place but forcing yourself into something simple/trivial over and over again isn’t the only way to grow.

Of course, like every habit, forever is a rarity. I don’t know if I’ll still be playing Wordle next year and, in general, predicting my life a year from now has proven to be a fool’s errand. And that’s something I’m starting to accept too.

Come December 2022 I know I’ll probably be sitting on a podcast with my peers saying “remember when everyone was playing Wordle? I can’t believe that was this year.” But there’s nothing wrong with those flash in the pan moments either. It doesn’t have to mean failure, flop, or trivial trend. Moments in time can be just that… moments.

And in an era where everything feels so influx and unstable, Wordle is a welcomed way to kick off the year.